Being a single young woman can be tough – especially if one has specific needs. Chrissy could have a dozen dates per day if she wanted to, but that’s not what she craves. She’s a natural born submissive, which is nothing you advertise or reveal to your new acquaintance at a bar. So, when her need to get tied up and dominated gets too strong, she turns to the internet for relief. Much to her surprise, she easily finds a dom whose profile looks like a perfect match. Chrissy invites him over. He agrees and tells her how to expect him. There’s no doubt who will be in charge from now on!

Next thing Chrissy knows is she’s waiting for a complete stranger in a very revealing outfit: super short plaid mini skirt, white blouse, white knee stockings and black high heels. Her hair is in a ponytail and she’s wearing a neck choker. That’s exactly what the dom ordered. Some rope and a ball gag are lying on a table, ready for use. Chrissy can’t recall having ever been so nervous and excited! It feels like ages till finally there’s a knock on her door. The unknown man enters. Dressed all in black and holding a small whip in his hand he surely looks like the dom Chrissy has fantasized about. He checks her out and seems very pleased with the sight. After complimenting Chrissy on her sexy outfit, he asks what exactly she has in mind. She blushes with embarrassment. But, after all, that’s what he’s here for, so she tells him she wants to be hogtied. The stranger rightly assumes that this would be her very first time. He is more than willing to make her wish come true – but on his terms! He explains that for submissive girls getting tied up by him the experience comes with punishment. What’s more, from now on she will have to call him Master. Chrissy didn’t see that coming, but it sounds even more exciting, so she agrees. And she finds the right words for doing so by replying “Yes, Master.” Master orders Chrissy to get down on her knees. She instinctively assumes a slave girl’s position by putting her hands palms up on her thighs. But Master wants an even clearer sign of submission. He orders her to lean back into an arched position and look up to the ceiling. This makes her breasts protrude seductively. It also exposes her throat, almost begging for his hands to choke it. And indeed, he grabs her throat firmly. Given that all her body weight is resting on her hands behind her, she has no way of escaping his firm grip. Master orders her not to move. “Yes, Master” she responds, but as soon as his hand releases her throat, she raises her head. Obviously, Chrissy needs some training. A slap with the whip on her thigh and another clamping of her exposed throat reminds her of the rules. When Master is convinced that his slave’s compliance will be good from here on, he asks her to confirm that she wants to be tied and punished. “Yes, Master.” The tip of his whip begins to explore her arched body, touching her thighs, breasts, cheek, mouth, and throat. He even slides it under her skirt! It’s a humiliating procedure, but Chrissy seems to like it. Next, she is ordered to stand up and undress. She slowly removes her blouse and skirt, revealing that she is not wearing any underwear. Her beautiful breasts and smoothly shaved pussy along with the knee stockings and high heels she is still wearing make for a gorgeous sight.

Now Master wants his naked slave over at the kitchen table which is just a few steps away. Having her walk is not what he has in mind, though. Chrissy needs to get down on all fours and crawl across the room. When she reaches the table, she is told to get up, bend over it, and spread her legs. She complies and gets rewarded by a spanking with the whip, followed by some groping of her ass cheeks. Master then ties a rope around her waist and runs it through her crotch, having it almost disappear between her pussy lips. Chrissy wouldn’t admit by herself that this turns her on, so Master asks whether she likes what he is doing to her. “Yes, Master” she replies shyly with her voice lowered. With the crotch rope still biting into her flesh, Chrissy is ordered to get on top of the table. She is ordered to lie on her back and assume a vulnerable position by spreading her legs. Master feels up her naked body, gropes her breasts, and teases her with his whip. Then he surprises Chrissy by pulling her to the edge of the table with her head hanging off. He puts his hand around her exposed throat while continuing to explore her body with the whip. Although it’s obvious that she is enjoying this treatment, he asks whether she likes it. “Yes, Master.” Next Chrissy has to lie on her stomach while Master brings over some of the rope she had laid out. Her ankles and knees are tied together (off screen) which feels naughtily exciting to her. Does she want more? “Yes, Master!” Master continues by tying her wrists and elbows together (again off screen) and then rolling her onto her side. He tests her flexibility by pulling her hair and ankles toward each other, arching her backwards. Another round of groping and whipping is due, including twisting and pulling her revealingly erect nipples. Now Chrissy’s secret wish is finally about to come true. While she is still lying on her stomach, a rope is tied to her ponytail and connected to her tied ankles, pulling her into a strict hogtie. Is she okay? “Yes, Master.” Does she like this? “Yes, Master.” Does it turn her on? “YES, MASTER!” Does she want more? “Yes, Master . Please gag me, Master!” A large red ball gag is shoved into her mouth meeting not much resistance. It gets secured tightly with the strap behind her head. Almost instantly, drool starts to drop from her mouth. Chrissy moans and struggles helplessly. She rolls from one side to another, which is about all she can do with her arms and legs bound and her head arched back. Her breasts alternate between getting squeezed by her weight and moving freely when she rolls around or arches back even more. With every movement, the rope running through her crotch rubs on her clit, adding to Chrissy’s arousal. Her body is literally begging for a climax.

After several minutes of letting her struggle Master thinks Chrissy deserves some reward for her suffering. Time for the magic wand! As soon as it touches her it sends shivers through her spine. Does she like this? “Yes, Master!” her gagged mouth responds almost unintelligibly. It does not take long for Chrissy to experience her first bound orgasm. She’ll never forget that one, and hopefully there’s many more to come! But now, once Master has untied her, it’s time for rewarding him for his excellent work. 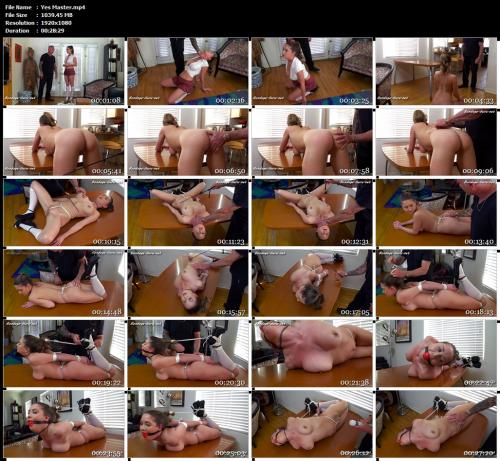