Chrissy is known as the bikini bandit. She sneaks into a house looking around for cash. While she is looking around we get some nice views of her great ass and body. She digs through some drawers while bent over. She is unaware that another bad guy is trying to rob the same house and ends up seeing her. He sneaks up behind her and clamps a rag over her mouth and nose! She tries to fight it and mmmpphs in protest as he gropes her boobs. Once she is knocked out he carries her over the shoulder while fondling and spanking her ass. He takes her to a chair and begins to tie her up.

Chrissy awakens to find herself tightly bound to the chair. She begins to question what the bad guy is doing and demands that he untie her immediately. The bad guy then walks in and begins taunting her and groping her. She tries to say things like “you will never get away with this!” But she is cut off by a hand gag. All this while he fondles her lovely boobs. She remains feisty and defiant throughout. Eventually he gets sick of her bitching so he stuffs a pair of panties in her mouth and ties a white cloth over her mouth and nose. She is now furious as the bad guy delights in helping himself to her boobs. Then he leaves her to struggle. She tries to get free but the ropes are too tight and the knots are all out of reach. After a bit she hears a knock! She tries to call out for help through her gag. The bad guy rushes over to hand gag her already gagged mouth! He tells her to keep quiet as he yet again aggressively fondles her boobs. Unfortunately for her no one comes to save her and he decides that she needs to be moved. So he knocks her out again then unties her from the chair and carries her over the shoulder to the bedroom.

He throws her down on the bed still bound and gagged. He decide she needs to be tied up more so he adds some rope right below her ass. She begins to wake up and struggle and angrily protest through her gag. He fondles her body and rolls her over so he can spank and grope her ass while verbally teasing her. After playing with her ass for a while she is rolled back over and sat up on the bed with the bad guy behind her. He claims she doesn’t need her top anymore and takes it off. She is now fuming in anger. He then decides since she is a bandit that it’s only fitting she have a bandana tied over her already gagged mouth. Now with the beauty heavily gagged and helpless the bad guy fondles her exposed boobs while she struggles and squirms between his legs. Finally he removes her mask to see its Chrissy! He tells her she is going to be caught! He puts her to sleep one more time and gropes her unresponsive body. The last thing we see is her being carried off over the shoulder. Chrissy the bikini bandit picked the wrong house to rob today! 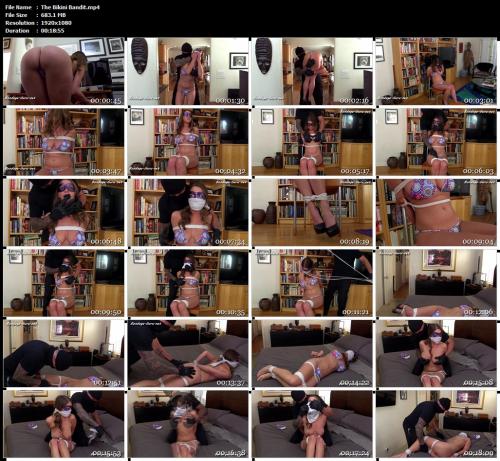 Tied Up In My Turtleneck 3 – Captive Chrissy Marie