Catburglar Chrissy is busy robbing a house when all of a sudden she hears the garage door. She goes and hides and the homeowner Constance walks in. She sits down on the couch, take off her heels and starts to run her nylon feet that are sore after a long day at work.Luckily Catburlgar Chrissy came prepared. She sneaks up behind constance and pulls a white cloth out of her catsuit.She surprises Constance when she suddenly clamps it over her mouth and nose. Constance tries to fight it but the sleepy drug quickly takes effect causing her eyes to roll back and then slowly close.

Catburglar Chrissy also came prepared with rope. After checking Constance’s limbs to make sure she is completely out, Catburglar Chrissy strips off Constance’s dress mentioning that it would be a perfect getaway outfit for her so she doesn’t look suspicious. Then she gets to work tying her up! She tightly ropes her ankles, thighs, wrists and elbows. At this point Constance starts to wake up! The Catburglar is prepared with a thick cleave gag to keep her quiet while she finishes her work. After gagging her she puts Constance into a strict hogtie while she explains her plans to steal all her valuables and leave her tied up. And that is exactly what the Catburglar does…. she leaves Constance bound and gagged and struggling helplessly in nothing but her pantyhose while Catburglar Chrissy finishes robbing her house! Constance came home from work a little too early today! 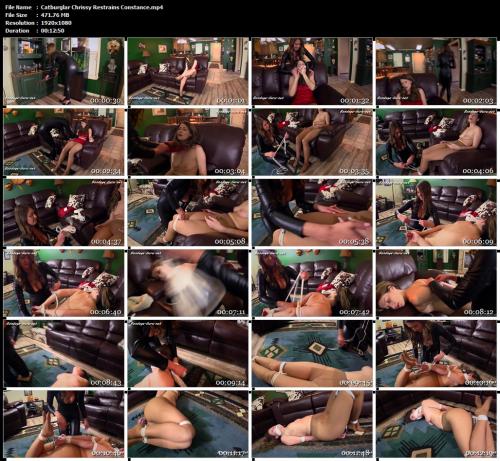