Chrissy is at home relaxing in her comfy turtleneck sweater dress and cable knit knee socks. She runs hers hands up and down her soft socks and is so engrossed in her magazine that she doesn’t notice the robber who has broken in and is sneaking up behind her! When she least expects it he grabs her and clamps a white cloth over her mouth and nose. She is initially wide eyed in fear but then struggles violently to break free from his grasp, but he is far too strong and the chemicals soon begin to take effect as her struggling slows and her screams turn to soft whimpers as her eyes roll back and finally close. He gets right to work tying her up so that he can go on robbing the place. He binds her limp wrists, ankles and thighs with rope, then finally turns her over and hogties her. To his surprise as he starts to grope her ass she starts to wake up. He was sure that stuff was supposed to last much longer than that! He quickly grabs the bandana at of his pocket and tightly cleave gags her with it before she can scream for help. She begs him to let her go but he just leaves her struggling helplessly hogtied on the couch while he gets back to business! She struggle against her bonds and mmmpphhhs through her tight cleave but after some time she still hasn’t made any progress. She decides to try and work her way off of the couch, which turned out to be much harder than she expected, and only made things worse! She still can’t find a way to escape or call for help. Then the robber returns and she begs and pleads that he let her go now, she promises she won’t call the cops! Instead he just pulls her turtleneck up over her mouth and nose leaving her cries even more muffled and completely hopeless. He tells her he got what he came for and is going to leave her there bound and gagged until someone else finds her in her humiliating position! The door slams behind him and she can’t believe she is stuck here bound and gagged in her turtleneck with no help in sight! She struggles around some more but the ropes only get tighter and tighter as she pulls on them. It’s not long before she begins to give up hope that anyone will find her before it’s too late! 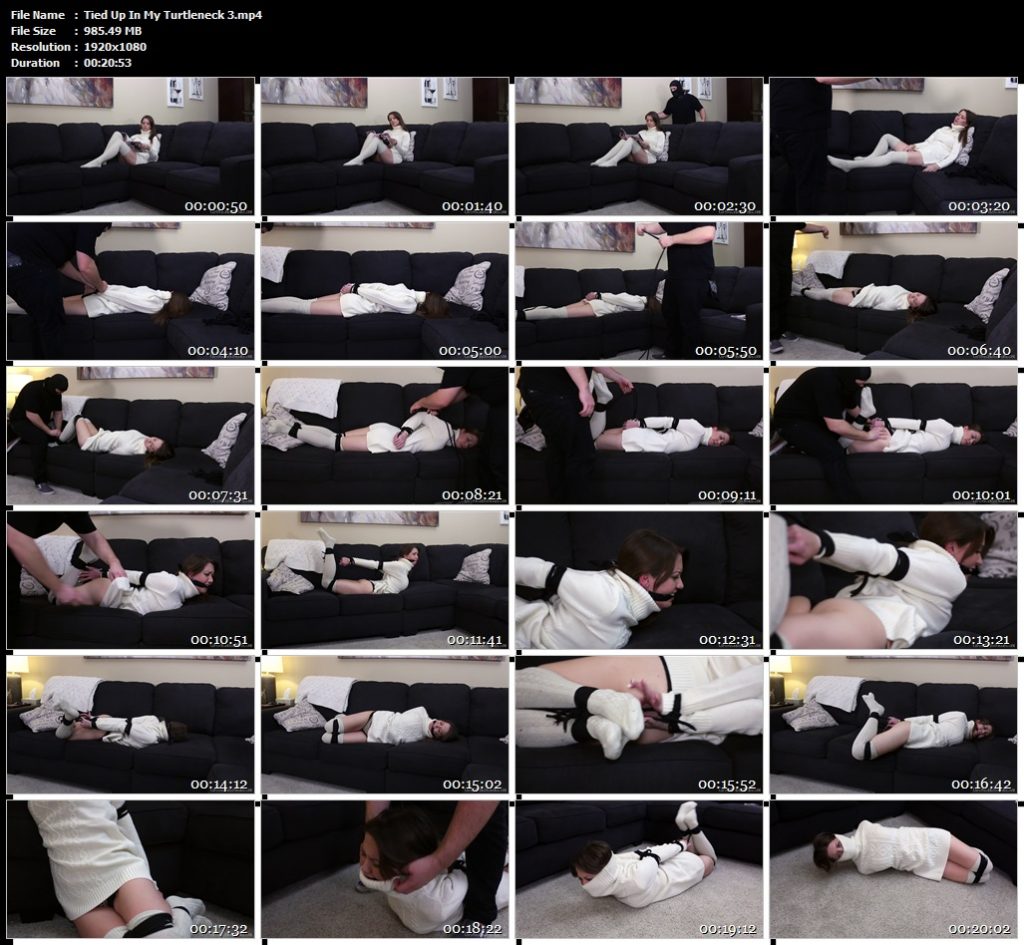