Chrissy is just getting home and sits on her bed to remove her shoes and knee socks before heading to the bathroom to freshen up where she comes face to face with a scary masked man! She tries to run but he grabs her by the hair and throws her down on the bed, threatening her not to scream if she doesn’t want to get hurt! He orders her to put her knee socks back on which she does as she trembles in fear and tries to tell the man he can have whatever he wants and to just leave her alone! Then he crosses her wrists behind her back and binds them tightly with rope as she begs and pleads for him not to tie her up! Chrissy complains that the rope hurts but just tells her to get used to it! He makes her stand up and move into the next room where he ties her body to hard wooden chair. He asks her the combination to her jewelry safe but refuses to tell him, so he slaps her face twice and that makes her give it up!

He then lifts up her skirt and starts removing your panties as she squirms and asks him why he is taking her panties off! He tells her he needs them to keep her quiet. Chrissy starts begging and pleading with him not to gag her! He wads up the panties and holds them to her mouth. When she refuses to open, he pulls her hair hard until she opens wide then shoves the panties into her mouth. He then takes a long white cloth, folds it several times and ties it tightly over her mouth and hair, knotting it tightly several times behind her head. He says he is going to test how effective her gag is and reaches inside her blouse to pinch one of her breasts, but all that comes out is a muffles scream! He finishes by tying her legs and ankles together as well as attaches a rope from her ankles to her bound wrists! He then goes to rob the place and Chrissy struggles desperately to free herself from her predicament, mmmppphing through her panty stuffed extra tight OTM gagged mouth along the way! Eventually she is able to somehow free herself from the tight knots. She removes her gag and makes a run for the door but he quickly catches her and hand gags her tightly. He isn’t finished with her yet!

Now Chrissy is sitting on the couch tightly tied but not gagged yet, her blouse has been unbuttoned exposing her bra. While robbing her, the burglar finds out her dad is rich and Chrissy overhears him talking on the phone demanding he pay $10,000 ransom for her! He then brings the phone to her ear and she frantically tells her daddy that she has been tied up and gagged and to please pay the ransom! The burglar hangs up and then does the unthinkable, and forces the poor girl to service him on her knees! When he is finished using her he says has to keep her quiet again, then disappears and she struggles hard but the ropes won’t budge. He comes back holding a pair of her panties he got from her hamper, as well as a white stocking and the same damn white cloth she was gagged with before! Chrissy again begs not to be gagged, but it’s no use, he shoves the panties in filling her mouth, tightly cleave gags her with the stocking then tops it off with another highly effective OTM gag over the top! Just to be sure of how effective it is, he pulls out her tits and gropes them and she struggles and mmmppphhs angrily towards him! He leaves her on the couch struggling a while he searches for more valuables. She eventually gets to her feet and tries to hop to the door in her white knee socks. However, the burglar again catches her in the act, this time throwing her over his shoulder and carrying her back to her bedroom!

Chrissy is now laying on her bed again, still tightly tied and now topless in just a pair of thin white panties, sheer thigh high stockings and a garter belt that he made her change into. The burglar comes over holding the white cable knit knee socks she was wearing earlier. She asks what he is going to do he says he is going to gag her with them. She begs him not to, insisting there is no way that sock is fitting in her mouth, but he just pulls her hair and starts shoving it in all way until she starts making gagging noises. He stretches her mouth as wide as possible until he can fit the entire sock in her mouth. He OTM gags her with the other knee socks and her mouth is packed so incredibly full that you can barely hear her pathetic mpphhhss at all! You can see the agony on her face from being so severely sock gagged! Too add further humiliation he ties a crotch rope around her waist, securing it to her bound hands, then tops it all off with an insanely tight hogtie, sure to keep her in her place until daddy arrives with the ransom money! He is coming from overseas and surely won’t arrive before morning, so Chrissy is left alone to struggle hopelessly and try to keep from gagging on the huge knee sock stuffed deeply into her mouth! 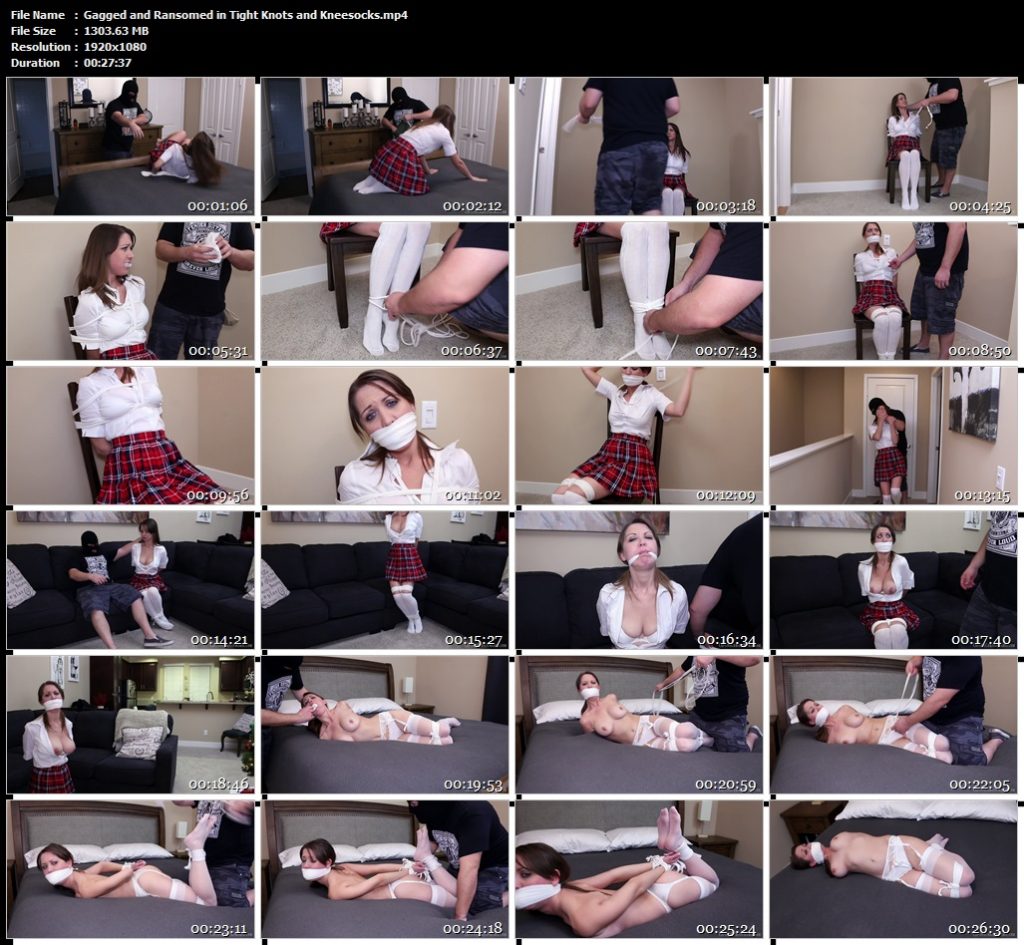