Chrissy’s hands are tightly taped behind her back and she has a knotted cleave gag in her mouth. She has gotten her legs free and is frantically trying to find a way out from where she is being held captive, but all the doors are locked! Unfortunately for Chrissy she does not manage to escape before she is caught again. He drags her back into the garage and tapes her up even tighter than before! He also changes her gag and stuffs a huge pair of panties in her then wraps a ton of tape around her mouth and head. Now you can barely hear her cries for help. Then he removes her skirt to further discourage her from trying to escape again. He leaves her struggling but no matter how hard she tries she cannot break free from the tape this time! Later he returns with another idea. He has to leave for a while and just to be sure she won’t be going anywhere, he wraps tape around her legs and body securing her into a tight ball tie. Then he exposes her breasts and leaves her there bound, gagged and struggling helplessly in her now inescapable predicament. She should not have tried to escape and now she’s paying the price! 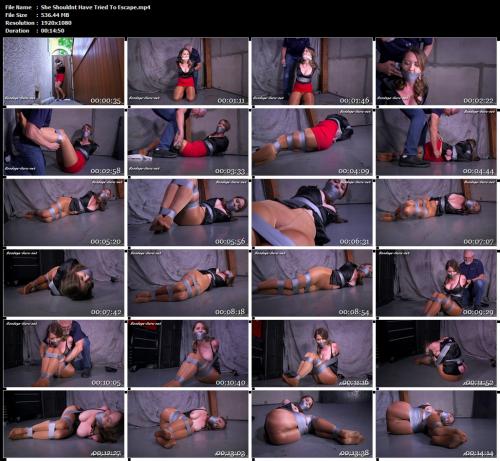