Super Chrissy is snooping around a local villain’s hideout. She thinks she’s going to catch him by surprise, but unfortunately for her he’s been expecting her. He grabs her as she approaches the back entrance of his hideout, grabbing her and clamping a cloth over her mouth before she can react. Usually this would be no problem for Super Chrissy to fight off, but this villain knows her ultimate weakness and has a special cloth laced with kryptonite. She fights as long as she possibly again but eventually her body gives in and she falls limp in his arms. The masked villain carries Super Chrissy into his hideout and proceeds to strip off her uniform leaving only her panties and knee high boots. He takes a moment to grope her before deciding he should get her secured and wait for the kryptonite to wear off.

Later Super Chrissy wakes to find her arms stretched high over head and tightly bound in rope. She struggles but is still too weak to break free. The masked villain returns and begins to interrogate her as to who her informant was. how did she find his secret hideout? He knows someone in his organization ratted him out and he wants to find out who it was. When she refuses to talk he gives her a hard punch in the stomach. She reacts in agony but still refuses to tell him what he wants to know. So he gives her a few more belly punches in an attempt to get her to talk but to no avail. Super Chrissy is too strong willed to give in no matter how much pain he inflicts on her. He decides since she won’t talk he might as well ballgag her. Once she is gagged he holds the cloth over her mouth for a few more seconds just to make sure she doesn’t gain too much of her strength back. The villain then strips off her thong and boots, leaving her fully nude and balancing on her tip toes from being stretched so tight! He proceeds to torture her some more by whipping her with the flogger on her breasts, belly, and bare feet! After a thorough flogging the villain tells her he is just going to leave her hanging there over night. Maybe by morning she will be ready to talk! Super Chrissy is not used to feeling so weak and helpless. She tries to struggle but it’s not long before she slumps from exhausting ordeal. 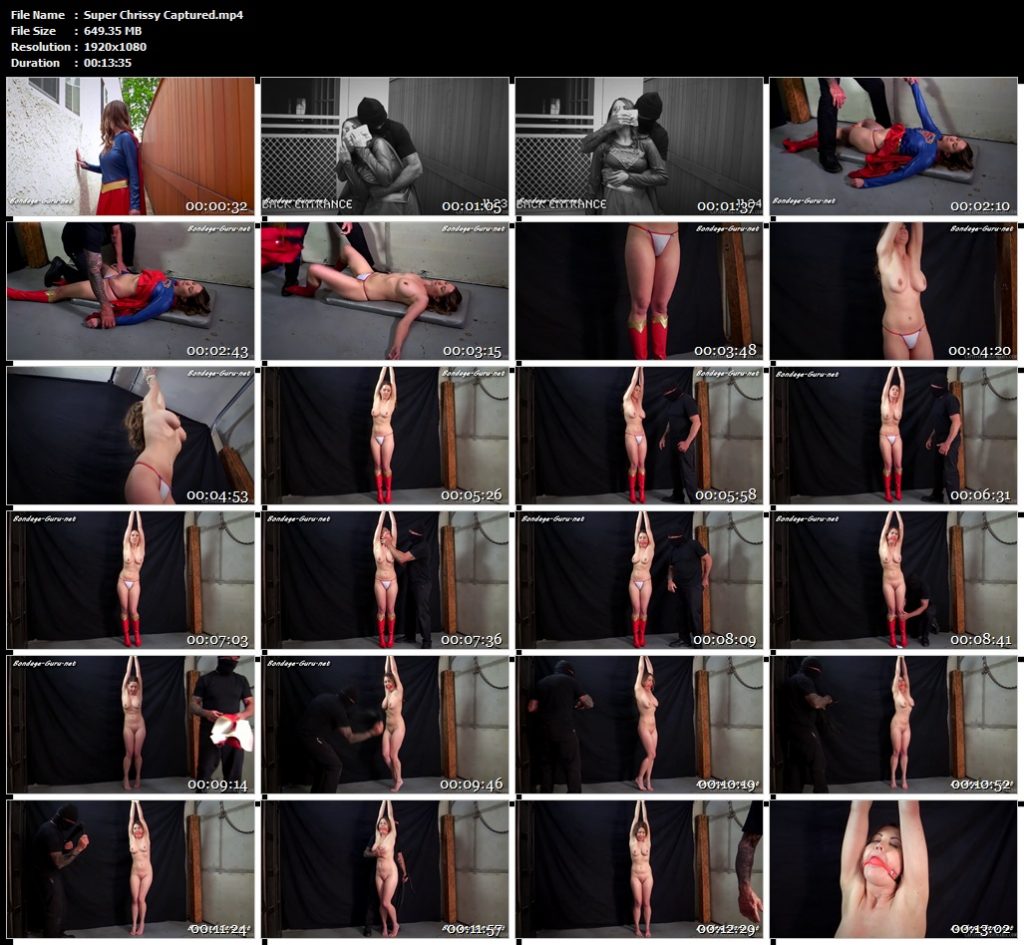