Penny and Dolly are waiting for Penny’s friend to come home and are very bored… What will they do in the meantime?

Dolly suggests they could do some bondage game to surprise Penny’s friend. Penny grabs a few ropes to tie her up. Dolly’s wrists and ankles get tied with dark pink jute rope. Penny checks if she is properly secured and leaves her to struggle for a while while she phones her friend.

Penny returns to check on Dolly if she’s still tied up properly. Dolly is still tied as she should be and suggests Penny to gag her. Penny gets a roll of 2″ Microfoam tape and wraps around a tape gag. Dolly now tied and gagged is left alone again to fully experience the bondage game. She struggles for a while till she had enough.

Penny Returns and removes the gag of Dolly. They now only have to wait for Penny’s friend to come home. 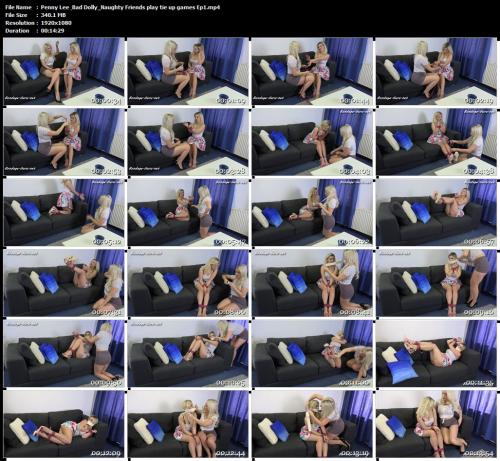