Chrissy is waiting for her date at home. They are going to be staying in tonight and she has a special surprise for him. When he arrives she starts to do a strip tease for him, but as soon as she removes her dress and he sees her in lingerie and shiny stockings he can’t resist anymore. He says she may have had something special planned for him, but he also has something special planned for her. He wants to tie her up. Especially now that he has seen the sexy lingerie she is wearing. Chrissy agrees to try out this kinky idea, not knowing exactly what she is signing up for!

He proceeds to tie her wrists and elbows together behind her back and adds even more rope around her breasts. Then he ties her legs together at the ankles and above her knees. So far nothing she can’t handle. She gets a nice surprise when he ties a tight crotch rope on her. Chrissy admits that she likes it, but she didn’t realize what was coming next. The end of the crotch rope is pulled through her forearms, back to her ankles, then up to her chest harness, arching her into a very strict and tight hogtie. She tells him she doesn’t really like this anymore and would like to be untied now, but he isn’t done with her yet! He slowly removes her heels to reveal her sexy stockinged feet then surprise gags her with a ring gag to shut her up!

Chrissy is really starting to get worried now that she even can’t talk at all! As if she wasn’t tied up enough already, he ties another rope to the base of her ponytail and attaches it to her welded elbows to pull her head back. Now she is fully bound, gagged and practically immobilized! She squirms and struggles as much as possible and is obviously extremely unhappy with her predicament. The ring gag and head arched back has made swallowing very challenging too so the drool starts to flow quickly. Eventually she manages to roll onto her side but she discovers she is hogtied so tight that she cannot roll back on her front. Chrissy feels truly helpless and hopes that he plans to untie her soon. She definitely did not realize what she was getting herself into when she agreed to be tied up! 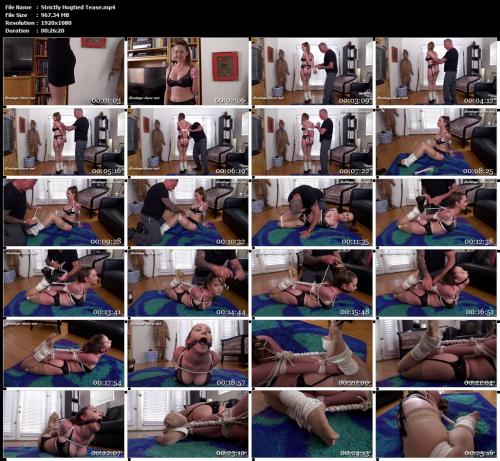