Chrissy is tied spread eagle on a bed in a basement wearing a sheer black bodysuit and high heels. Chrissy slowly awakens and is confused and scared. She struggles and begs for help. After a few minutes, a man enters the room carrying a glass of water. Chrissy begs to be released, asks who he is and what he wants but he ignores her. He kneels beside her and runs his hands up and down her legs and squeezes her breasts. He places a finger over Chrissy’s lips and hushes her. He then holds the glass to her lips and tells her to drink. Chrissy refuses so he tugs her hair roughly until she opens her mouth and drinks. The man puts the drink down and begins to explain the situation as he continues to grope her. “Hello Detective. Seems you’ve angered a few people with your latest investigation into the mafia and they want you to stop.” Chrissy begins to talk back “you can’t-” but the man puts his finger on her lips again to hush her and pinches her nipples for interrupting. “Unfortunately for you, they have hired me to break you and get you to drop the case.” Chrissy tells him she won’t be broken! “They all say that at first” he replies. He then pulls out a pair of balled up panties and forces them into Chrissy’s mouth then puts a strip of duct tape over her lips. He then grabs and mp3 player and puts the headphones into Chrissy’s ears. “I’m going to get some sleep, I’ll leave you with some relaxing music – I hope you like heavy metal.” Chrissy shakes her head no but the music starts playing. The man leaves Chrissy squirming. After a few minutes, the song ends and Chrissy sighs in relief but lets out a groan of frustration as the song suddenly begins again a couple of seconds later.

Scene fades to the next morning. Chrissy is tired from not sleeping all night. The man re enters the room with a glass of water. He removes the mp3 player and gag. “Are you ready to submit?” he asks. “No, I won’t submit!” she responds. The man holds the water to Chrissy’s mouth and tells her to drink. “Please, just let me sleep” she begs. He tells her if she drinks maybe he will let her rest so Chrissy drinks some water. Then he tells her we are going to try something new today.The man grabs some electric nipple clamps and clips them onto each of Chrissy’s’ nipples. He explains they will shoot powerful waves of electricity through her body every few seconds. If she manages to doze off this should be enough to jolt her awake again. “But you said you’d let me sleep-argh” Chrissy is cut off as she reacts to the electric shock. “I lied” he says then wraps a black cloth around her eyes blindfolding her and leaves. We watch Chrissy squirm and get shocked for a few minutes as she tries to doze off until the scene fades. Now we see Chrissy is still tied on the bed but without the blindfold or clamps. Her hair is tied up to the head of the bed so she can’t move much. She is exhausted and trying to sleep but water is dripping on her head from above. We watch her squirming weakly for a few minutes before the scene fades again. In the next scene the electric clamps and music are back on. She is blindfolded and cleave gagged. After a couple minutes of watching her struggle weakly the man enters. Without removing the blindfold or giving her the chance to speak her removes the gag and makes her drink. Once she has some water he puts the gag back in. The man then ties a hitachi wand between her legs and turns it on before leaving again. We watch Chrissy squirm for a few minutes before the scene fades.

In the final scene the electric clamps, music, cleave gag, blindfold and vibrator are all still in place. The man enters again and removes gag and blindfold. He turns off the vibrator and removes the headphones and electric clamps. He tells Chrissy to drink which she does. Then he asks if she is ready to drop the case. “Yes yes, I’ll do anything If you will let me sleep” she pleads. “I need you to prove it first” he says. He then pulls Chrissy’s phone from his pocket and tells her he is going to phone her work. When they pick up she will explain that she is quitting immediately and closing the case. He holds the phone to her face and she does as she was told. “There, I’ve done it, now let me go.” Her captor explains “I would, but the mafia have chosen to pay me extra if I train you as a slave. Now you need to tell your family you have found a new job in Columbia and need to leave immediately”. Chrissy says she won’t do it. The man goes to put the headphones back in her ears so she agrees hesitantly. The captor calls her mom and she explains about having to leave town for a while. After he hangs up the phone she begs “I’ve done what you asked – now will you let me sleep?”. “I’m afraid not” he replies. “What? But I did what you asked”. He tells her that he lied yet again. “When I said they paid me extra to turn you into a slave. They actually paid me extra to make you disappear, permanently. Nobody will find you here and now no one will even be looking.” Chrissy begs and pleads with him but he just re gags and blindfolds her before turning all the equipment back on. The man exists the room leaving the tired Chrissy to struggle helplessly and contemplate her perilous fate. 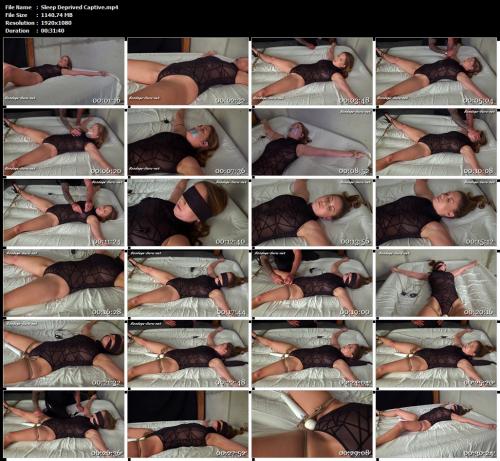