He has been having a problem with Rachel, the lady who lived next door. This weekend, his wife is out of town and apparently, Rachel was aware of this. Today the man heard a noise at his window and caught Rachel looking inside his house. When he went outside and grabbed her, she told him that she was sure he was cheating his wife while wife was away. So the man told her that he would take her inside and show her that there was no one else inside.

The video begins with the man taking Rachel into his garage. He has already shown her the inside of the house. As she looks around, the man cannot help but notice that Rachel is dressed way to sexy for a housewife just going next door to check on a problem. She is wearing a dress that is so tight, he can see the impression of garters holding up her stocking under. She is also wearing high heels. At one point, Rachel notices that the man has rope. Lots of it. “What do you use this for?” she asks as she hold up some of the rope. “None of your business!” he tells her. But she insists on asking and expects an answer. So he tells her that he uses it to tie up snooping neighbors. He then grabs her and pulls her arms behind her. “You wouldn’t dare!” Rachel tells him, but hardly puts up a fight. “Maybe I’ll tie you up!” the man replies. “Oh really. I dare you!” The man realizes that Rachel came to his place dressed the way she was because she wanted to play. He knew her husband hardly paid much attention to her and most likely didn’t satisfy her in the bedroom. So a short later, Rachel found herself all tied up in the man’s garage. Having an interest in bondage, Rachel wants to carry this further and knowing the outcome of her next remark, she threatens to scream for help. As she expected, the man stuffs and ties a gag in her mouth and now Rachel is very turned on. The man grabs her by her throat and makes her admit to him that she came over because she wants to play. Rachel gives in and nods her head “Yes” as she also tries to tel him through the gag. So the man uses more rope until her has her completely tied up. Later he returns to her with a roll of tape. He tells her that when he bends her over and uses her as his captive sex toy, he doesn’t want anyone to her her loud moans. Rachel even more excited now, couldn’t agree more. The man wraps the tape over her already packed and gagged mouth. He then lifts her dress and crotch ropes her. After pulling her boobs out of the dress, he hogties her on the floor and leaves her to struggle bound and gagged. As she squirms around, Rachel cannot help but notice what the rope pushing her skimpy thong panties up inside her is doing to her. That along with the thought of what the man is going to do to her causes her to lose it and have a bound orgasm. Then later, the man returns and Rachel can hardly control herself. He tells her that first, he would like to use her mouth. The man cannot get the tape and gag out of her most fast enough for Rachel. And when it is off, she opens her mouth wide as she sees him start to unzip his pants. 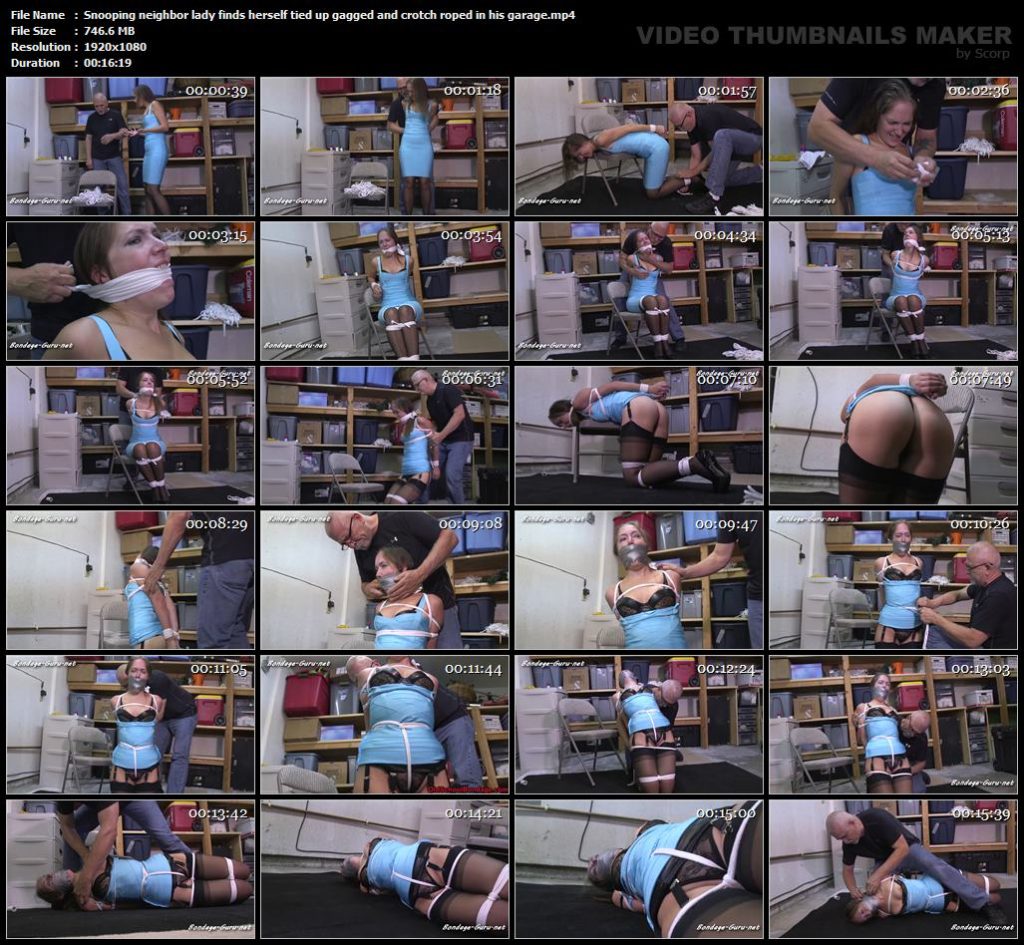 Mouth Stuffed and Tied Up Girls – RACHEL-Caught me snooping-What are you going to do! Tie me up like those girls in your books!

Rachel Adams…Trapped, Tied and Tickled in the Basement Dungeon! – TIED IN HEELS