Catwoman was in the process of stealing a secret formula to make Batgirl her slave when she got caught by Batman! He used his batarang to tie bind her with ropes wrapped all around her body. Now Catwoman tied up and cleave gagged. She struggles furiously but with her hands tightly bound behind her back escape won’t be easy. Luckily her henchman finally returns and removes her gag. Catwoman is obviously annoyed as she questions him to where he was… he was supposed to be watching her back while she made the theft! The henchman explains that he had to go to the bathroom. “It’s impossible to find good help these days!” she remarks, obviously irritated. The henchman goes on to ask where Batman is and she explains that he went to go get Commissioner Gordon so they have to get out of there now! The henchman attempts to remove the ropes bur he’s too slow. Catwoman instructs him to grab the vile lying next to her that contains the secret formula and get her out of there… he can untie her later!

The henchman has Catwoman over his shoulder as they arrive back at her lair. He lays her down on the bed and she asks if he still has the vile. He pulls it out of his pocket and shows it to her then curiously asks “What’s so important about this stuff anyway?” Catwoman explains that it is a powerful, mind altering, aphrodisiac… and it contains catnip. This gives the henchman an idea. He surreptitiously applies the drug to a white cloth as she explains her plans to use it to enslave Batgirl… and all the other powerful women in the city! She boastfully laughs, proud of her sinister plans, when all of a sudden he clamps the white cloth over her mouth and nose! Catwoman was not expecting this betrayal! She tries to fight him off but is soon overwhelmed with the effects of the potion and starts to become more and more turned on. With one hand keeping her hand gagged, the other begins exploring Catwoman’s body, which only makes her even hornier! The henchman continues to alternate between hand gags to keep her quiet and applying more of the rag to keep her in a horny trance. Catwoman greedily accepts when he decides to gag her with a strip of microfoam tape. The groping and hand gagging continues as Catwoman works herself up into having a hand gagged bound orgasm! Now that she is spent he decides to hogtie her until she’s ready for round two… and she doesn’t protest as she gladly accepts the additional rope. Her henchman leaves her struggling helplessly bound and gagged. Before long she manages to struggle out of her heels, exposing her nylon sheathed feet, sensuously rubbing them against each other as she savors the silky sensations. Catwoman continues to writhe around on the bed as she waits for him to return, enjoying every second of being tightly hogtied and extremely horny in her catnip induced trance! 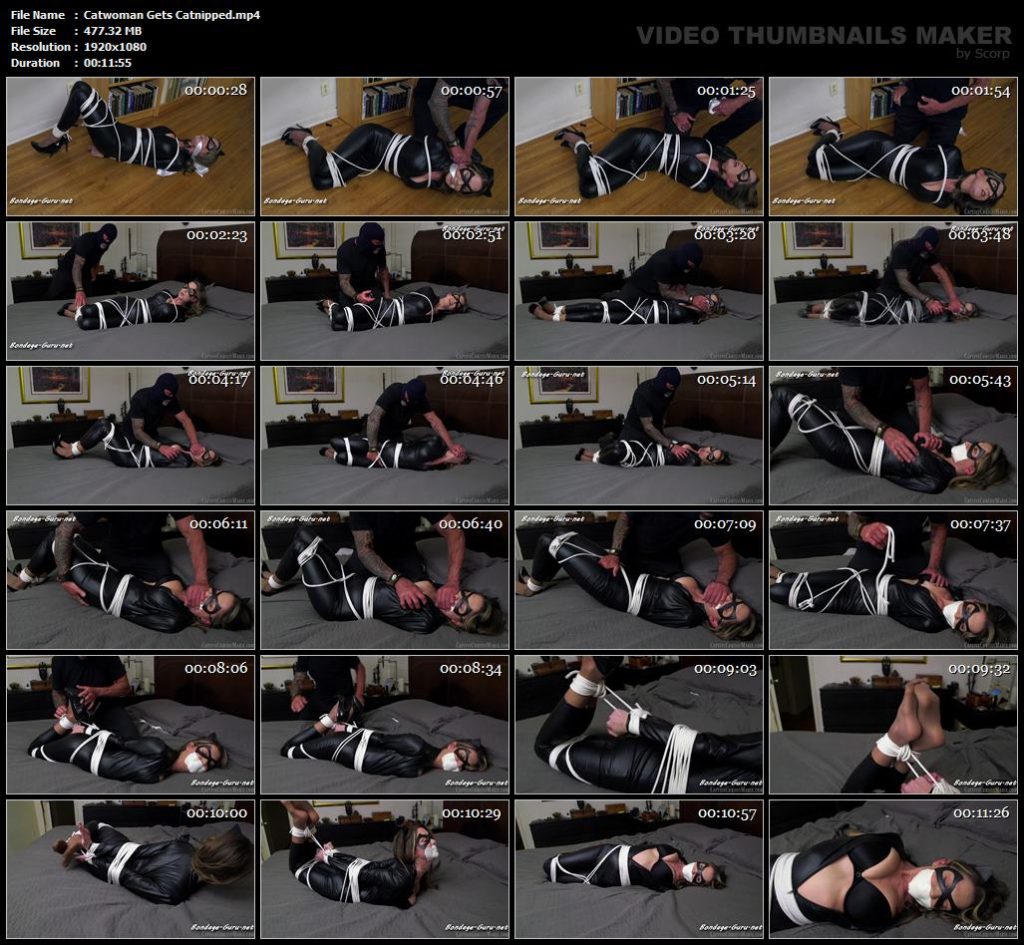