Chrissy is an arrogant and self-centered high paid businesswoman who is at home and is just about to leave for work when she hears a knock at her door. She opens the door to find our villain who is pretending to be a gas company employee who is stopping by to check for gas leaks, but it’s really just a front for his burglary enterprise. She seems rushed and doesn’t really want to listen to the guy, but he tells her that he needs to go in and check for leaks and that it could be very dangerous if he doesn’t. She sighs obviously bothered by him but decides to let him in and tells him to hurry up so she can go to work. He comes in and proceeds to get to work. However he needs Chrissy to leave so that he can get on with stealing her possessions. He starts off by asking if anyone else is home. Chrissy naively doesn’t think anything of this question and responds with a no and that her husband is away on a long business trip. He then tells her that this job is going to take a while and that she can go to work and that his services are free and there will be no bill from the gas company. She impatiently tells him that there is no way she is leaving a shady character like him in her house alone. This puts off the villain since he is used to robbing homes when no one is there and now he is stuck with Chrissy watching his every move. That’s okay, our villain has a plan for every contingency and brought some items to help him get her out of his way so that he can get on with his business. Chrissy sits on the couch crosses her legs, complaining the whole time about how stupid this whole thing is and that she is in a hurry and is pretty much just being a huge bitch to the villain. He decides he’s going to have to incapacitate Chrissy and tie her up so that he can get to what he came there for!

He tells her he thinks he found the problem. She responds with a “FINALLY!” and gets up from the couch to go see. He points out the fake problem so that she will look in closer. As she does this our villain has a perfect opportunity to grab her from behind and clamp a white rag over her mouth and nose. Chrissy struggles ferociously until the chemicals slowly calm her and her eyes roll back in her head as she slowly falls to sleep. He sets her down on the floor and gets right to business, binding her arms behind her back with white rope and ties her legs at the ankles. Just as he about to start tying her legs above the knees she starts to stir and wake up. He realizes he must not have dosed her enough so he quickly grabs his white cloth and applies it to her face again as she struggles then slowly falls back to sleep. Once she is out again he quickly finishes tying her legs above the knees and adds a few pieces of duct tape over her mouth to keep her quiet. He goes about his business of robbing the place but soon after he leaves Chrissy slowly starts to wake up again. She is very angry at her predicament and struggles mightily, angrily mmmmphhh-ing through her gag. How dare anyone tie up this rich businesswoman! She struggles hard and becomes quite noisy so the villain returns and decides to add some more rope to teach her a lesson. He ties he around the chest as she squirms and angrily bitches at the villain through her tapegagged mouth. After he finishes tying her he says that he thinks he likes her more when she is quiet and puts her back to sleep with the white rag while he tells her his plans, that he wasn’t really from the gas company, and that he was only there to rob her. He tells her that she is stupid and should have just gone to work and she would have saved herself the trouble of ending up bound and gagged!

Chrissy lays limp and asleep on the floor until she eventually begins to wake for a third time! She struggles hard trying to figure out a plan of escape before the villain returns and knocks her out with that damn rag again! She can’t believe it when she sees her cell phone lying on the floor not too far away. She squirms over too it and tries to grab it with her hands. However just as she is about to get a hold of it the villain interrupts her. He tells Chrissy that he is very upset with her and that he normally just robs the place and leaves his victims bound and gagged, but since she was such a bitch to him he is going to make it even worse for her. He says he knows a guy that would pay a high price for a girl of Chrissy’s caliber. He tells her that he plans to sell her over seas and that her life as an arrogant businesswoman is over. Chrissy is shocked to hear this and of course is very angry and vocal, gag talking frantically that he can’t do this to her! Our villain then explains to Chrissy that since she found her phone she can’t be trusted to be a good bound and gagged victim and that he has to put her to sleep for a much longer time, probably her whole trip overseas! He shows her an industrial mask he has doused with the same chemical from the cloth and tells her he has to put it on her because she was naughty and that the next time she wakes up she will be overseas. Chrissy shakes her head no and for the first time looks a bit scared! The villain fixes the mask over Chrissy’s nose and gagged mouth and she struggles mightily but the chemicals slowly take effect. Her eyes start to roll and her mmmmphhhhs get softer and softer until her eyes finaly close. Sure that she will be out for a very long time, the villain picks up our sleeping masked businesswoman and cradle carries her out of the room, ready to take her away to her new life! 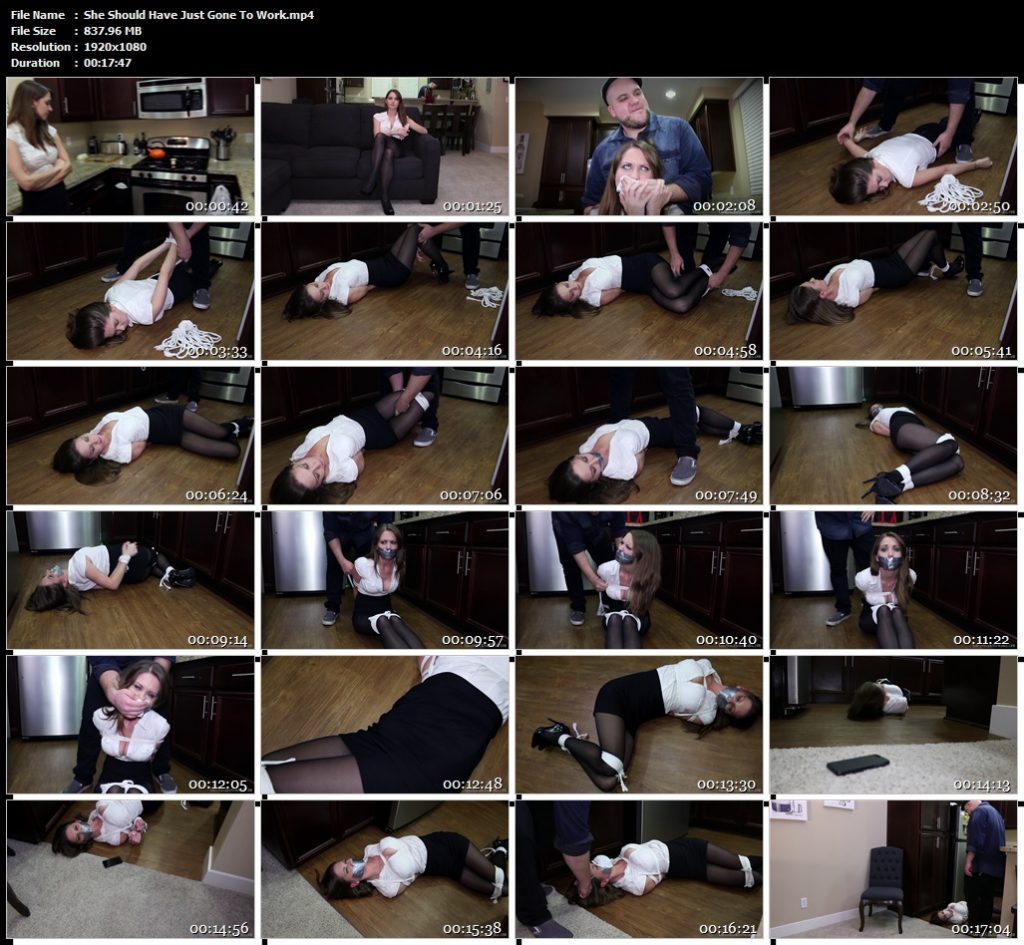