Dixie has just gotten back from a bad day at work. She’s talking to her friend on the phone and informs her that her roommate is gone on vacation and it’s just her for the week. She says she’ll try to feel better and ends the call…just as a hand reaches over and rags her out from behind! Dixie puts up a fight, but to no avail. Dixie wakes up laying on the floor with her wrists and ankles taped. As she comes to her senses she tries to gets up and get a grip on her situation. Before she can manage to get up, the intruder from before grabs her. Dixie asks what he wants. He tells her that she already knows, and that he’s been waiting a long time for this opportunity. Dixie tells him to take whatever he wants, just to leave her be, that he can trust her not to call the police. Obviously the intruder isn’t going to fall for that! He pulls out more tape to her annoyance and starts to tape her around her upper body. Dixie asks if he could make it less tight which prompts him to tape her bound wrists to her waist as he simply says “No”

Dixie continues to tell him she has plenty of stuff and just to take it. She’s already secure enough, and that she can’t do anything even if she tried. The intruder grabs her by the chin and asks her “Out of everything here, I only want ONE thing.” Dixie tries to ask what he means but he shoves a pair of panties in her mouth before she can let out a word. The intruder then wraparound tape gags her tight. After he finishes gagging her, he grabs her by the chin again and says “The answer? Is YOU! I know no one is coming for you, and you’re all alone. After tonight you will be mine, and then no ones!” Dixie tries to jut her legs furiously at him to kick him with her heels, but he catches her legs. “You can still fight? Good I knew I was going too easy!” He pulls the tape back out and proceeds to tape her thighs, knees and calves. The intruder gropes her and says “Now that you mention it, I think I will take some of this lovely stuff of yours!” He orders her her to stay put, otherwise it WILL get worse.

After he leaves Dixie notices her cell phone was left on the floor! Dixie props herself up and begins to scoot towards it, looking around to make sure she doesn’t get caught. She grabs her phone and begins to try and dial it, Just then the intruder bends down and put his hand over her eyes “You’re not doing yourself any favors, you know what, I could just grab that anchor in my car and throw you in the lake. Do you want that? Do you wanna hang like a pirate? Dixie looks at him with fear in response “No? Good. Now you gotta learn this the hard way.” The intruder says then removes her high heels and tapes her feet together and puts some tape around her hands! He holds up Dixie’s phone in front of her and says “We’ll be having none of this. I said YOU are MINE.” He reveals Dixie’s breasts, and pinches her nipples as she mmppphss in protest. He then tells her to stay put as he goes to ready the car.

Dixie struggles furiously and desperately tries to escape but it’s all for nothing. After a couple minutes the intruder returns. He tells her “after enjoying your other stuff I think it’s time I enjoy YOU! He pulls down her tights and bends her over. We see a close up shot of Dixie mmphhhing and indicating the intruder has begun to take what he really wanted. Cut to Dixie on the floor now. Tired. Tights pulled down. Hair a bit messy. Still taped up tightly. The intruder returns to grab her, but not before saying “Time to go! Don’t worry, the anchor around you will keep you company in the trunk!” He says as he lifts Dixie up, taking her to her fate! 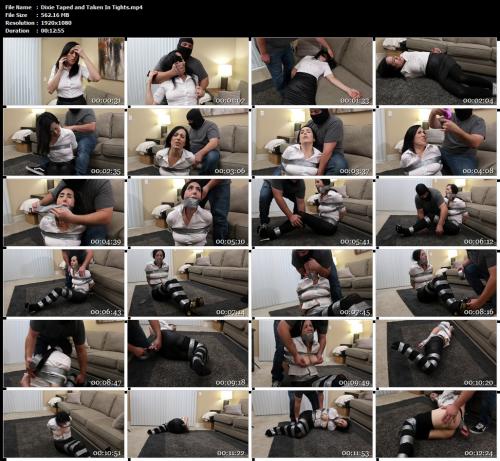