This is a story about a famous burglar (Chrissy) and a private detective (Star). Our detective Star is on a mission to capture the famous burglar in return for a large cash reward. The scene starts with Chrissy the burglar searching the house for valuables when suddenly Star sneaks in and confronts her. A short catfight ensues between two girls and Chrissy manages to overpower Star and tapes her hands crossed behind her back with duct tape. She also tapes up her ankles, thighs. Star is loudly protesting so Chrissy decides to tape gag her around her head to shut her up! She finishes by adding more tape above and below her breasts then goes to find the loot, leaving Star tightly bound and gagged, certain that she won’t be able to escape!

However Star is determined to get that reward and struggles hard in her desperate attempt to escape. After few minutes she finally manages to break free! She hides and awaits her chance to get revenge! Needless to say, when Chrissy walks in and sees that Star escaped she is a bit upset. Before she can even question how it was possible, Star confronts her again and some trash talk ensues leading to a new cat fight between the two. This time Star overpowers Chrissy and tapes her up the same way that she had been. Her wrists, ankles, thighs, breasts and mouth all end up tight bound in tape as Star teases and torments her for getting caught! Star removes Chrissy’s high heels since she won’t be needing them any time soon, and doesn’t want her to use them to break the tape, like she was able to. Star then steps out of the shot to make a call and announce that she successfully captured the famous burglar. While Star is away Chrissy struggles furiously to escape but she can’t manage to get loose! After a few minutes Star returns and removes the tape from Chrissy’s legs so that she can walk her out and turn her in so she can collect her cash reward! 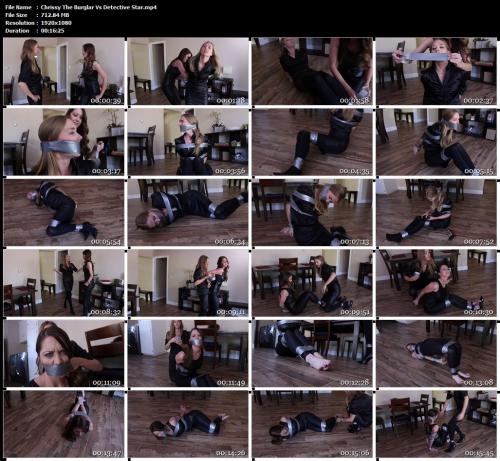