Chrissy and Dixie are planning to spend an intimate evening together and are both dressed in sexy black lingerie. Chrissy is bare foot but Dixie wears black thigh high stockings. Chrissy caresses her nylon legs enjoying the way they feel. She asks Dixie what she would like to do tonight and she mentions that there is something new she would like to try! Chrissy is a bit surprised when Dixie pulls out a set of hinged handcuffs and leg irons! Chrissy takes a closer look at them and sees that they are the real deal like the ones cops are issued. Dixie tells her she wants to see them on her. Chrissy is a little shy about the idea but ultimately agrees to indulge her girlfriend in her fantasy. Chrissy’s wrists are bound in hinged cuffs behind her back and her bare feet are secured tightly in the shackles. She struggles lightly as she tests out her restraints. Dixie then says she has something that will make it more interesting and proceeds to blindfold Chrissy. She explains that they are going to play a game where Chrissy has to find the key while blindfolded and free herself from the restraints. Chrissy is up for the challenge!

Dixie throws the key and Chrissy begins her search, struggling as she tries to feel around the room for the key. Dixie tells Chrissy she has one more surprise for her and will be right back. Chrissy’s search continues to be unsuccessful while her girlfriend is away. Finally Dixie returns with the big surprise! What Chrissy doesn’t know is that the surprise is a big red ball gag! Still blindfolded, she has no idea what’s coming when Dixie tells her to open her mouth and proceeds to gag her with it! It’s obvious Chrissy is not pleased with this surprise, but now she can’t say much about it! She just continues her search for the key as her girlfriend teases her about her helplessness, refusing to give her any hints! After a bit more searching Chrissy finally finds the key! It takes some work but she eventually manages to free herself from the cuffs and shackles. She removes the blindfold and gag and tells Dixie now it’s her turn! Before Dixie can refuse she cuffs her hands behind her back. It’s only fair that she experience it now too! She also blindfolds, shackles and gags her as she explains that she was not happy about the ballgag surprise and now she is going to have to get a little revenge. They aren’t going to be playing the find the key game this time! Dixie if left struggling bound, ballgagged, blindfolded with no idea when Chrissy will return with the key! 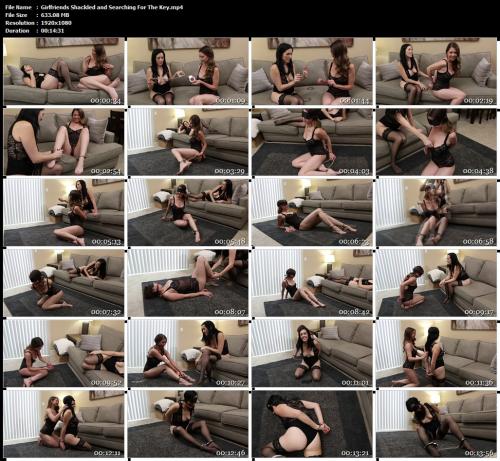