Cinched and Secured – Sahrye vs Rachel – The Gag Contest Part 2

Sahrye’s frustrated gag talk and Rachel’s delighted laughter are both interrupted by an unexpected knock on the door! Seems a neighbor has stopped by unannounced, and he’s delighted by the idea of a gag contest! He quickly grabs and binds Rachel tightly! Once the girl is thoroughly secured, the neighbor ungags Sahrye, who is delighted, as she expects to be set free, but she’s in for an unpleasant surprise too! The neighbor packs the gorgeous Latina’s mouth with a huge scarf, slowly cramming it in until her cheeks are bulging, then follows that with a nice red handkerchief! Sahrye’s eyes grow wide as her cries become muffled grunts! The cloth has completely stuffed her big mouth, and the neighbor wraps another scarf around her head in a tight cleave gag to hold everything in! A tight cloth OTM gag is added over that leaving the poor girl VERY muffled! Now that he has a little peace and quiet, the neighbor goes to work on Rachel! Her mouth is stuffed full of splash balls, further compacted into a solid mass by the giant white ball gag that is forced into place, buckled tightly and then covered with a brutally tight wrap around microfoam gag! Rachel’s eyes are bugging out of her head as the sticky stuff winds around and around her face, and Sahrye gag talks up a storm all the while! Is she demanding to be freed? Is she gloating that Rachel is getting a taste of her own medicine? We’ll never know, because the instant her massive gag is removed, the creepy neighbor stuffs her mouth AGAIN with a giant striped yellow sock, held fast with a VERY tight cleave gag, followed by a few turns of white electrical tape, forcing the packing deep into her sexy mouth! Finally, he finishes the job with the second sock, tying it tightly over the whole mess as Sahrye gurgles and moans into her silencing gag! Our unexpected guest hasn’t forgotten about Rachel, however, and her gag is removed, only to have her mewling mouth stuffed with an entire car wash sponge! A few winds of tape form a cleave gag that threatens to make the poor girl retch, and wide electrical tape is wrapped around her head several times, leaving a solid band of black from just below her nostrils all the way down her chin! Her distress is quiet real, and Sahrye looks on in genuine fear and concern at the excruciating silencer! But either girl knew how bad this gag was going to be, as the gleeful neighbor went over THAT with several wraps of blue plumbers tape until the poor girl is barely able to breathe, let alone speak! Her eyes are red with tears, her breath whistles through her nose as she makes faint little pleas for mercy, but mercy is not in the cards for either girl! Since it’s getting late, the neighbor wraps Sahrye’s already stifling gag with vet wrap, reducing her angry gag talk to nearly inaudible grunts, then hogties the toes girls and leaves them to struggle as he leaves for the night! Completely helpless and with their silence guaranteed, the girls struggle and try to call for help as best they can, but each knows it’s going to be impossible to make anyone hear them. The contest was over, and the winner was clear: Their neighbor! 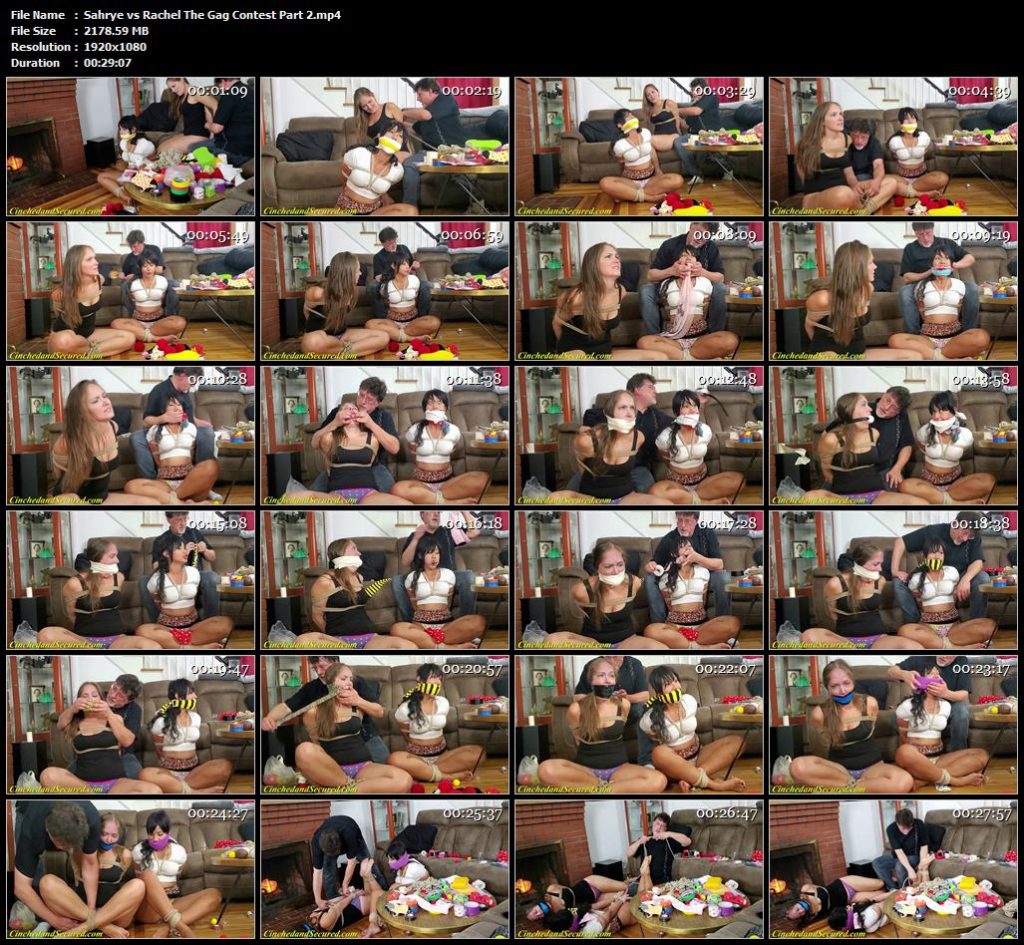 Cinched and Secured – Sahrye vs Rachel – The Gag Contest Part 1