Cinched and Secured – Sahrye vs Rachel – The Gag Contest Part 1

Sahrye and Rachel were spending a boring evening at home when they decided to spice things up with a little contest: Who could take the strictest gag? Each girl is supremely confident in their abilities, so they start with a simple self gagging. That is, it’s simple if you can stuff an insane amount of socks in your mouth before sealing them in with vet wrap and microfoam tape! After everything is packed in nice and tightly, the girls enjoy a little gag talk before removing the stuffing to see who won! Sahrye managed to fit ONE more sock in than Rachel, so she gets to take a turn gagging the cute little thing! She starts by packing FOUR handkerchiefs in Rachel’s waiting mouth, then wraps purple tape tightly around her face to hold everything in! Not content to stop there, Sahrye winds a few turns of yellow electrical tape over that, and then ties a cloth over Rachel’s mouth and nose! She can barely be heard through all the packing, but she’s such a good sport about it, Sahrye decides Rachel can gag her for a change! Rachel packs the lovely latina’s mouth with so many red sponge balls we lost count, and then used a rubber strap to fashion a nasty cleave gag. Determined to outdo Sahrye’s display of gagging expertise, Rachel then forces a big white ball gag in to the already massively stuffed mouth! Now that Sahrye cannot call for help, Rachel decides that she is having too much fun silencing the sultry siren, and soon Sahrye finds herself tightly bound and subjected to MORE gag torment at the hands of the cheating brunette! An entire yellow car wash sponge is crammed in, followed by a tight wrapping of red medical bandage around Sahrye’s beautiful face! To add insult to injury, Rachel adds the same yellow electrical tape Sahrye had used upon her! Grumbling through her stuffed mouth, she tries to make her displeasure known, but Rachel is having too much fun to stop now! First, she decides to try and do a more thorough job with the sponge ball/rubber strap ball gag, and Sahrye’s good sportmanship is gone for good now! Furious but unable to stop Rachel, she struggles and “mmmpph’s as Rachel undoes the gag and immediatel removes the huge sponge, only to begin repacking Sahrye’s mouth with an insane number of foam golf balls! A nice tight microfoam tape head wrap seals them all in, and more of the dreaded yellow electrical tape adds security to silence! Demanding to be let out, Sahrye writhes and gag talks helplessly as Rachel laughs at her plight, but little do the girls know that an unpleasant surprise is about to arrive! 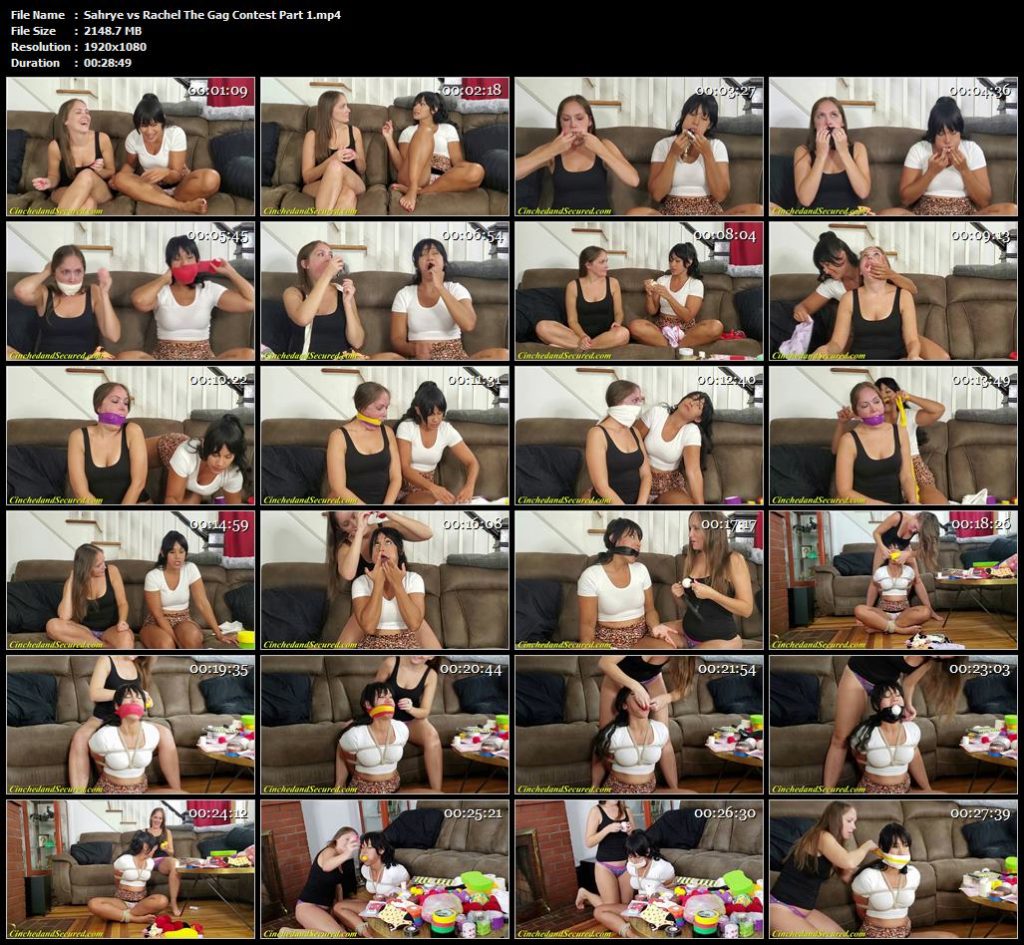 She mummified the town tease – Born to be Bound

Rachel and Scarlet at intake together part#2 – Handcuffed Girls