Petite Kelevra looked at first an easy business for the two masked crooks that snatched her. Sitting on the sofa with hands cuffed behind and er legs zip tied and cleave gagged the girl looks totally helpless. The one of the guys who has her in custody underestimated her dangerousness. So when she begged to go to bathroom to pee the guy complied after some hesitation. He frees her from bonds and leads her to the bathroom. Kelevra before entering thanks him in her on way, kicking him in the groin, and then closes the bathroom door behind her. She plans to jump out from the bathroom windows to make her escape but the other guy is guarding the house from outside and he immediately re-capture her.

Later we find Kelevra back in the dining room secured to a chair. The guy is finishing tying her to it with rope. She begs him to let her go because now she really needs to pee, but the guy obviously doesn’t want to take other risks and ties her tightly. Lately after having left the hostage tied for some hours, he comes back and tells her that she will get a prize for having behaved well. Of course the prize is not what Keleevra hoped for.

In her final position the helpless girl is hogtied with scarves all around her body and gagged as well (first with cleave, then with another scarf wrapped over her mouth). She’s dressed only with bra and panties. Struggling and rolling trying to escape doesn’t seem to get her anywhere, the scarves are a very efficient way to keep a prisoner securely tied without harming him. Now Kelevra has just to hope that the two captors collect soon her ransom and release her. 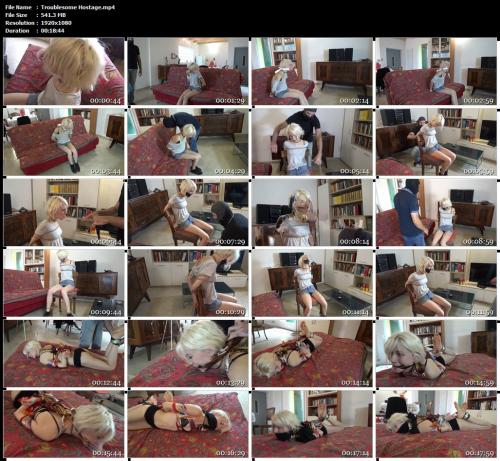