Selina is the younger sister of Layla. She’s totally different from her, she’s a timid, lazy girl while Layla is brilliant, successful career woman. And the worst characteristic of Layla seems to be her extreme conservative and puritan take on everything. Also for this Selina never told her sister about her passion for bondage, and played it in secret when her sister is away. She doesn’t want that her sister knows of this passion just to have another argument to harass her.

Thinking that her older sister is away, Selina expertly ties herself up using rope, cuffs and belts. She imagines to be a princess caught by the bad guy and waiting for the charming prince to show up and free her. Instead her dream turns in a nightmare when someone finds her. It’s not a prince but her older sister who came home much earlier than expected.

In the next scene we find Selina who is forced to confess her passion for self bondage to her sister. Selina tries to convince her Layla that what she does is nothing wrong and also gives her a wonderful sensation. Layla seems to be very reluctant at first but she finally accepts to be tied by Selina to feel this sensation. Selina ties her up as best as she can and adds a cleave gag as a last touch. In the end she thinks she’s done a good work and she enjoys for the first time in her life to be in control of her sister. She even teases her a bit and enjoys watching her struggle. But this moment of triumph is too short. She leaves Layla alone and when she’s back she sees her sister totally untied. Assuming her paternalistic attitude Layla tells Selina that she has to show her how things should be done and offers to tie her up. Selina accepts thinking that her sister can’t do a good work. Yet Layla reveals to be much a better rigger than expected and Selina starts strongly to suspect that Layla is not the bigoted conservative woman that she always thought she was. Layla showed also a considerable sadism in tying her sister nice and tight, crotch rope included and sealing her with a ball gag. Isn’t this rigging ability the secret weapon that Layla used to guarantee her success in business? Who knows. But the most urgent question for Selina is for how much time Layla is going to keep her restrained in this way because she’s tied her very tightly and the pain increases with minutes passing.. and, she hates to admit that but she’s turned on by her impotence. She doesn’t want that Layla notices that. That would be the ultimate mortification.

A curiosity. Selina practices self bondage in real life. All the first part of on screen self tying is a demonstration of how much effectively she can tie herself up. 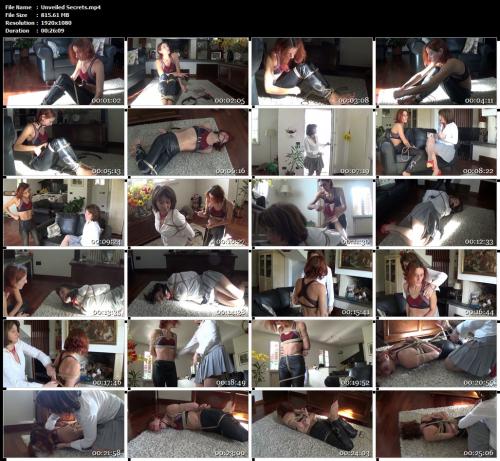 Lesbian couple having some fun at the expense of someone else – Bondage: JJ Plush, Born to be Bound