Chrissy knew her mom was cheating on her dad again. She followed her to a house and after waiting a while decided to snoop around. She cautiously enters and finds her moms clothes on the couch along with some rope. She’s known for a while that her mom has a thing about being tied up. but she is still upset that she is cheating on her dad and decides she has to do something about it this time. She tries to call her dad but he is in a meeting so she leaves a message to call her back, it’s important.

That’s when the man emerges from the bedroom and asks who are you and what are you doing in my house. Chrissy snaps back saying “Who are you and where is my mother!? I know she is cheating on my dad again. you probably have her tied up in there!” The man tells Chrissy that her mother is an adult and can do whatever she wants. Chrissy is annoyed and picks up her phone to try and call her dad again but the man grabs it out of her hand. He realizes he is going to have to keep her under control so he grabs some rope and starts tying her up!

Chrissy protests as the man ties her hands behind her back and binds her legs. Then she gets an attitude and threatens the man that she will scream really loud if he doesn’t let her go. So of course when she starts yelling out for help the man proceeds to gag her. with her moms panties and microfoam tape wrapped tightly around her head! Then he wraps more rope around her arms then leaves her there while he goes to tell her mother what’s going on.

Chrissy struggles but realizes there is no way she can escape the tight ropes so she works her way over to her phone and calls her dad but he can’t understand what she is saying because she is so heavily gagged! So she hangs up and tries to text him with her tied hands but the man catches her just in time! He takes the phone and pins her elbows together with even more rope! He leaves her again struggling and squirming in her bonds. Chrissy is starting to realize why her mother enjoys being tied up. The feeling of being restrained and totally helpless starts to turn her on. And the way that man handled her. it really makes her want more!

Later when the man returns and tells Chrissy that her mother said he can let her go now, Chrissy shakes her head no. She doesn’t want to be untied yet. The man is surprised by this and asks if she likes being tied up. Chrissy nods her head yes. So he decides to give her something else to enjoy. a nice tight crotch rope and hogtie! He unbuttons her blouse and watches as she eagerly squirms and grinds her pussy against the crotch rope. Then man calls her mother and informs her that she doesn’t need to worry, Chrissy isn’t going to tell her dad after all. In fact it turns out she like being tied up too! Like mother, like daughter! 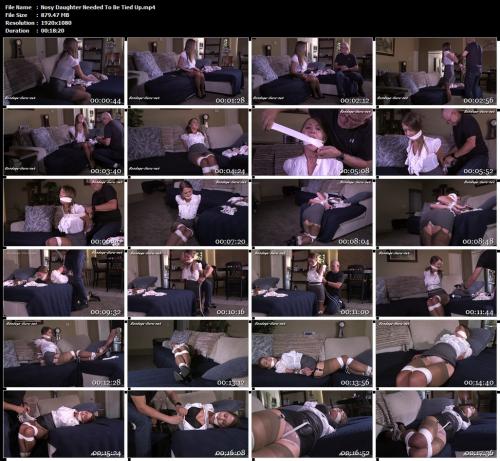