Chrissy is planning to go out with the girls tonight and is wearing a dress that leaves little to the imagination! She tries to casually out sneak by her husband who is watching tv hoping he won’t see her outfit on her way out. Unfortunately for Chrissy he quickly takes notice and asks where she thinks she is going dressed like that! Chrissy pleads with him, telling him she is just going out with girls and everyone dresses like this at the club! She begs him not to make her change, but there is not a chance he is letting her go out like that! Chrissy really starts to get an attitude with him and refuses to listen so he decides to teach his bratty wife a lesson for a dressing like a slut!

Her purple mini dress gives him an idea. He recently ordered way too many rolls of purple vet wrap and he is going to use it to restrain his defiant wife for several hours while he goes out with his friends instead! Chrissy gets really angry with him when he starts binding her wrists behind her back and then tightly pinning the down to her waist with the sticky wrap. Tired of listening to her bratty mouth he panty gags her and tightly seals it in with several wraps around her mouth and head! He finishes wrapping her up nice and tight using the entire twelve rolls of purple tape! (on screen) He leaves telling her she better change her tone by the time he comes home, whenever that may be! She is left struggling in the tight mummification, helplessly squirming and rolling around on the floor, until eventually she realizes there is really no way she can possibly escape. She suffers knowing she will be forced to endure her tightly bound and gagged predicament for at least a few more hours until he returns! 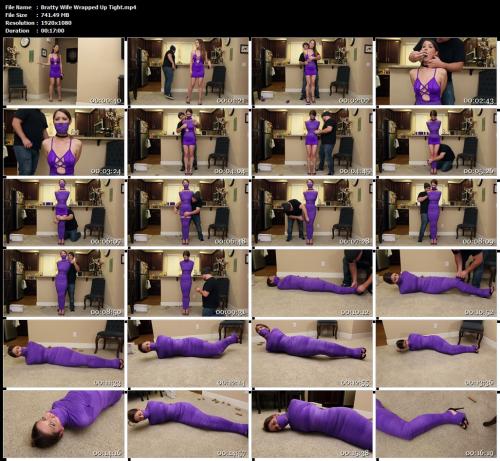