He carries her in over his shoulder and violently flops her naked body down on the bed. He plays with her limp body, manipulating her arms and legs and fondling her for a couple minutes, then decides it’s time to get her secured before his new little plaything wakes up! Chrissy slowly comes to and finds herself in a strange place, tied spread eagle to a bed with no recollection of how she got there! She starts to panic and tries to call out for help but can’t because she is gagged. She desperately struggles against the ropes and soon a masked man enters the room. She tries to beg and plead through her gag for him to untie but he remains silent which scares her even more! The masked man roughly gropes her body as she struggles and mmmpphhs in protest, but too bad he isn’t letting her go anywhere for a while! He takes the torment a step further by adding nipple clamps and she doesn’t seem very happy about that! And as if clover clamps aren’t painful enough as it is, he further tortures her by tugging on the chain, causing them to clamp down even tighter on her sensitive nipples. He briefly leaves her struggling, clearly becoming increasingly distressed at her predicament! He returns holding a cane, which of course he intends to use on his vulnerably bound captive. After teasing her with it he uses it on her thighs and exposed pussy. Bright red stripes quickly begin to appear up and down her thighs from the hard strokes. She has no choice but to suffer through the intense punishment while helplessly bound and gagged. He even gives her a few swats on her arms, tummy and clamped tits! She is pretty sure it can’t get any worse, until he decides it’s time to remove the nipple clamps, which turns out to be much more painful than putting them on! He leaves her for now but certainly has more plans for his sexy new plaything. Chrissy struggles hopelessly, knowing that she can’t escape, distressed and fretting over what’s possibly in store for her next! 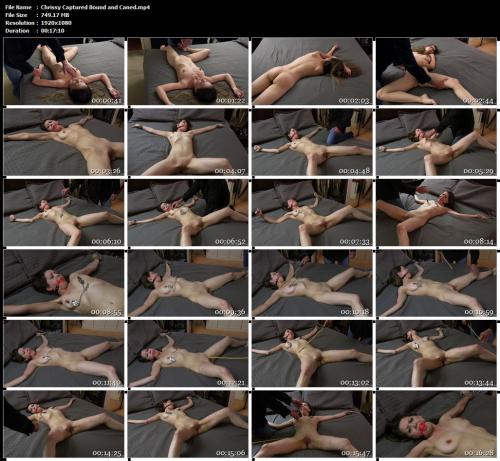