Caroline wants to play. But as usual, her husband doesn’t and has gone off to sleep. Watching television, she sees a scene in a movie where a girl gets tied up and gagged, and this gets her a little too excited. So she gets an idea. Knowing her step son is always up this late, Caroline dresses in high heels, a sexy long line bra and a black girdle with garters to hold up her stockings. She goes into the main room and finds the younger man playing video games. Seeing his step mom dressed in her underwear startles him and Caroline goes out of her way to make it even more uncomfortable for him by posing a little. Then she brings up the subject of bondage and she can tell he is now very interested in what she has to say. “How would you like to tie up your step mom!” she finally asks him. So a short time later, Caroline finds herself leaning over the counter with her hands tied behind her back and her ankles tied. Now very turned on Caroline gets even more daring and asks him to tie her tighter and with more rope. Then when he does that, she playfully reminds him that if she starts screaming, his father might wake up and will be very upset to find his wife tied up by his 19 year old son. Taking this as a hint to gag his step mom, Caroline next finds herself mouth stuffed and tape gagged. After watching his step mother squirm around on the floor bound and gagged for sometime, the step son decides to tie her down on a chair. But even though Caroline is tied helpless, it is very obvious she is still in charge and is calling the shots. And her belief is, what good is it to seduce her step son into tying her up, if there isn’t going to be some sort of naughty play. So somehow, the young man realizes what she is really after and lets her believe she is going to get her way. First he pulls her bra down to expose her tits. Then he un-clips her garters and lifts the girdle so her flimsy panties are showing. But the step son has no desire so do anything that could harm his fathers feelings and decides to teach his step mom a lesson. Caroline tries to protest and squeals through the gag as her step son tells her goodnight and heads off to bed. She bucks and kicks trying to get herself loose. But it is no use, she is tied too tight and is not getting out of this without help. So several hours later in the morning, she hears her husband wake up and walk into the bathroom to wash up. When he asks his wife if the coffee is brewing, all he can hear is a lot of grunts and whimpers coming for the kitchen area. 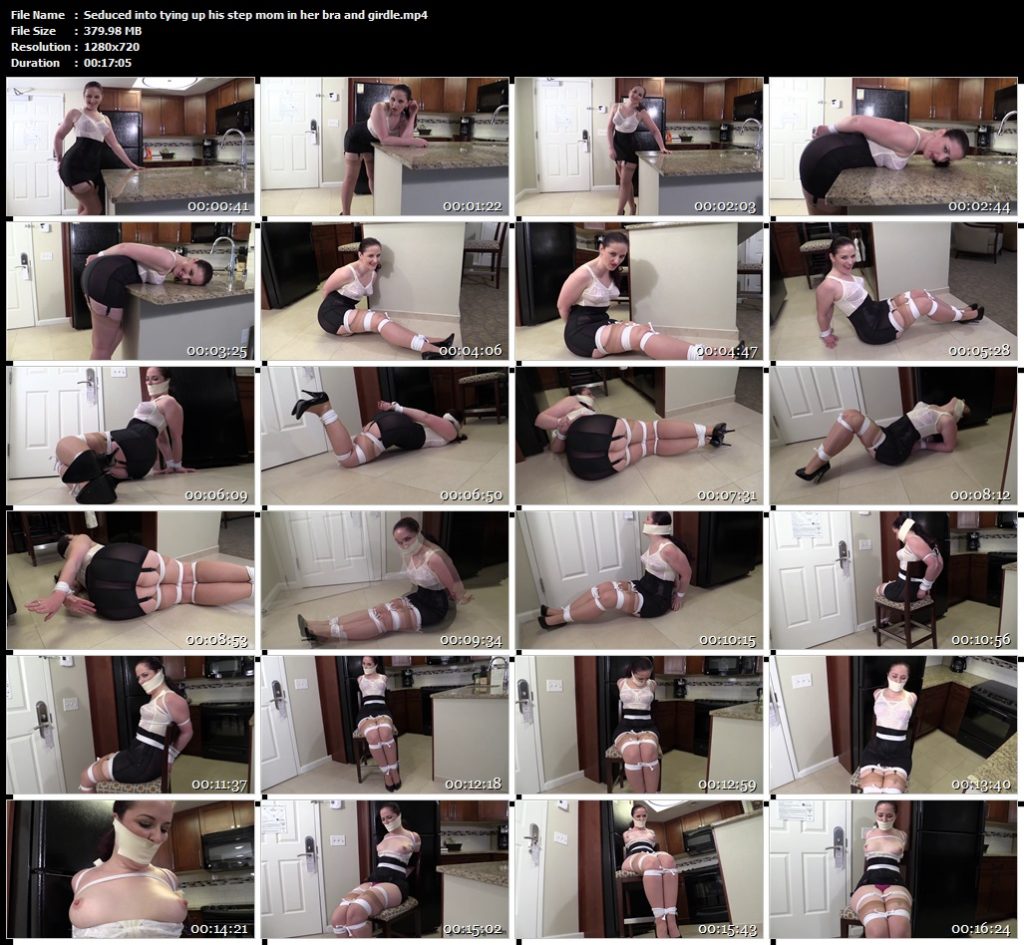