While she is out of town, the man’s wife asks if he will allow her daughter to stay with him for a few days. The man explains to her why that would not be a good idea. He reminds her that her daughter Whitney is a big flirt and has in the past made advances toward him. The wife is not worried about this and tells him to please let her daughter stay with him. Realizing that his wife does not care what happens, he gives in. “If I end up fucking her, I don’t want to hear you complain!” he tells her just before hanging up. Little does he know it, but Whitney has been listening to the conversation. When she hears him talk about having sex with her, she couldn’t be happier. She walks in and tells him that she heard everything he said to her mother and wants him to do exactly what he threatened. She starts to throw herself at her step father and then starts taking off her dress. She tells him that he may as well give her what she wants, because she is not giving up so easy this time. Knowing that pretty soon he is not going to be able to resist his step daughter anymore, the man comes up with an idea. He makes a challenge to Whitney. He tells her that if she can get out of a predicament he puts her in, he will give her what she wants. Not knowing or even caring what this predicament is, Whitney agrees to play along. The man comes back with a whole lot of rope and ties Whitney up with it. Much to his dismay, Whitney is turned on by this and tells him that she has been tied up numerous time. She tells him that she will be out of this in no time. While he is away, Whitney uses her teeth to start untying the rope around her thighs. But step dad has also done this before and knows how to keep a girl from escaping his rope. He comes back with a pair of his wife’s panties and stuffs Whitney’s mouth. He then tapes the panties in very tight to gag her and also make it so she cannot use her teeth to untie herself. Whitney still thinks she has hope of escaping. But this ends when step dad uses more rope to tie her elbows and arms behind her back. “I have never been tied up like this!” Whitney thinks to herself. She knows that getting out of this may be a bit more challenging than she first thought. But she does not give up and struggles hard to get loose. It doesn’t take her long to realize that she is not getting loose without someone’s help. But Whitney isn’t one to give up and now her plan is to get her step dad turned on by watching her struggle and squirm. Eventually she will get what she wants. But by then, her hands will be completely numb and her jaw will be sore for days from the tight mouth packing. 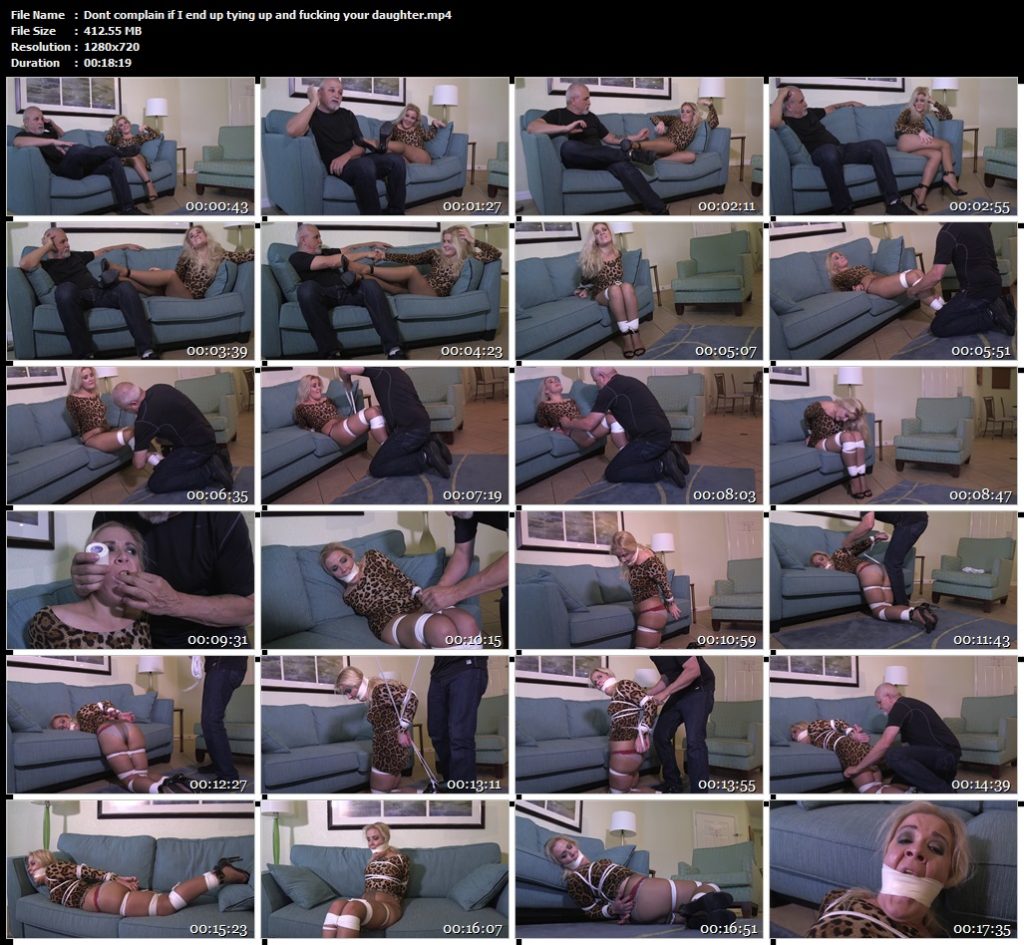