Sonia is new to town and is over at her new co-worker friend Dixie’s house. Sonia thinks it’s just a friendly get together but Dixie has the impression that it’s a date. Things get awkward when Dixie suggests that they go to the bedroom and full around and Sonia objects. Embarrassed, Dixie insists that it was just a misunderstanding and that they can just enjoy their wine platonically. Sonia agrees and Dixie goes off to get their wine. Sonia sits on the couch and tries to brush off the misunderstanding. Dixie comes back with the wine, they cheers to friendship and small talk a bit. Sonia starts to feel a little dizzy and tired pretty quickly and before she knows what’s happened, she’s out like a light. Dixie confesses to the sleeping girl that she put something in her wine. She gropes and limp plays her then lifts her from the couch to drag her off to the bedroom.

Sonia wakes up in the bedroom, her wrists are tied behind her back, she’s frog tied and ballgagged. She begins freaking out and struggling as soon as she gets her whits. Eventually Sonia catches a glimpse at herself in the mirror. She likes the way she looks all tied up and gagged and gets turned on. She starts to play with her pussy. Shortly, Dixie comes into the bedroom, naked, and laughs because she knew Sonia was kinky. She tells her not to stop masturbating on her account and sensually gropes Sonia. Dixie grabs some rope and ties up her chest. She decides that Sonia needs to be a gagged properly. She takes out the ball gag and replaces it with a pair of panties and a white cloth cleave. She then ties a hitachi between her legs. Dixie grabs her own hitachi and as Sonia grinds on the vibe, Dixie grinds on hers until both explode in orgasmic delight. Dixie ties up Sonia’s ankles and puts her into a hogtie and leaves her to struggle in ecstasy. 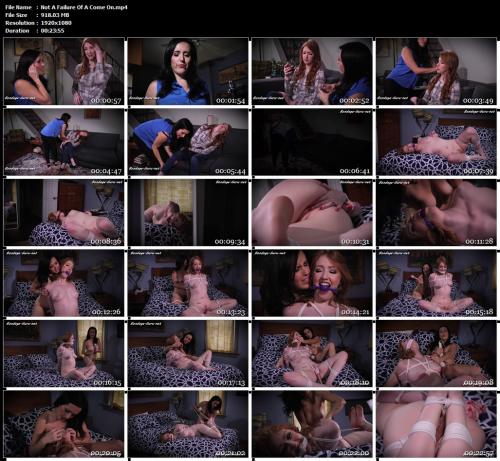