Dixie is a stereotypical, Suzy-Homemaker housewife backing cookies in her kitchen when the doorbell rings. It’s her neighbor Kendra whose come over to have a talk with Dixie. Dixie’s son and Kendra’s daughter are dating.Kendra is furious with her son’s behavior as it seems he’s been trying to pressure Kendra’s daughter into sex. Dixie insists that this is impossible because her little Johnny is a little angel would never do such a thing. But Kendra has screenshots of their son and daughter’s text exchanges. She pulls out her phone but when she turns her head, Dixie bonks her over the head with a rolling pin. Kendra’s eyes roll back and she falls to the floor in a heap. Dixie kneels over her body and tells her that she needs to teach her a lesson. She grabs her limp arms and drags Kendra from the kitchen.

Kendra comes to shortly later to find herself nude and tied up. A shock of disbelief rolls over her face wen she sees Dixie sitting there. She screams, “what are you doing?!” Dixie tells her that she’s going to have to be punished for creating such vicious lies about her precious angel Johnny. With that, Dixie shoves a ball gag in her mouth to silence the talking and lies. Dixie ties up Kendra’s chest as Kendra drool all over herself from being tightly gagged. Then Dixie starts taking off her dress, then her undergarments…Kendra is shook and tries to grab for knots. Dixie tells Kendra about how when Johnny lied when he was young she would wash his mouth out with soap. Not to worry with the soap though, Dixie will have to wash Kendra’s mouth out with pussy for her lying tongue to repent. She takes the ball gag out of Kendra’s mouth but gives her no time to plead. She shoves Kendra’s head into her pussy and makes her lick her until she cums.
Kendra sits up and tries to tell Dixie that she has learned her lesson. But Dixie thinks that she is being insincere. So she shoves her lying mouth full of panties and wraps her head with vet wrap. She believes in following punishment with positive reinforcement, that this is what has made little Johnny such a perfect angel. So she licks Kendra’s pussy until she cums. Dixie adds some rope to her legs then ties her into a crotch rope hogtie. Once she’s tied, a look of distraught comes over Dixie’s face as she sees her beautiful neighbor laying there naked and tied up. But Dixie shakes it off and remembers that she has a roast to tend to. She gets up, puts her apron back on and mentions how she can’t wait for her sweet angel Johnny to be home and walks into the kitchen. Kendra lays there in shock for a second until it’s safe to start trying to struggle out of the ropes the psycho next door tied her in. 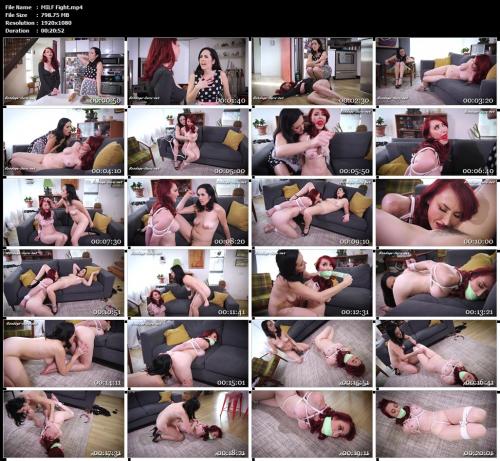