Dixie’s pretending to be an interested party looking at a house that realtor Reagan Lush has for sale. Reagan shows her the house and seems put out because an offer was accepted for the property early in the day. But Dixie still insists on viewing the house and steers the tour to the bedrooms. They make it to the master bedroom and that’s when Dixie pulls a ball gag from her purse and makes Reagan gag herself with it to keep her quiet. Dixie informs her that it would be in her best interest to make the pending sale fall through because Dixie has been sent by an interested party that will allow her to go to extreme measures to make sure that they acquire the property. Reagan will not relent but Dixie thinks she can persuade her otherwise. She tells Reagan to undress. Reagan reluctantly strips completely naked, trying to cover herself but Dixie takes care of that by tying her wrists behind her back. She shoves Reagan on the bed, spreads her legs and licks her pussy until Reagan is forced to succumb to an orgasm. Dixie tries again and asks if she’s going to drop the sale. Reagan tells her no through the ball gag. Dixie is liking where this is heading. She grabs more ropes, ties her legs up and strips out of her clothes. She takes the ball gag out of Reagan’s mouth and Reagan tires to reason with Dixie telling her that there is nothing that she can do, the sale is out of her hands. Sooooo Dixie makes her eat her pussy as more punishment and reason to change her mind. But even after, Reagan is still refusing. Dixie stuffs her worn panties in Reagan’s mouth and wraps them in with vet wrap. She apologizes to Reagan that she’s done all she could do to try to convince her otherwise but now she has to call in the big guys to take care of business. Dixie tells Reagan she likes her and she feels bad that it had to come to this, so she ties her into tight crotch rope hogtie to maybe help Reagan get her mind off of the impending doom that lies ahead. Dixie leaves the room to go make the phone call to her boss and Reagan furiously struggles in the sturdy tie. 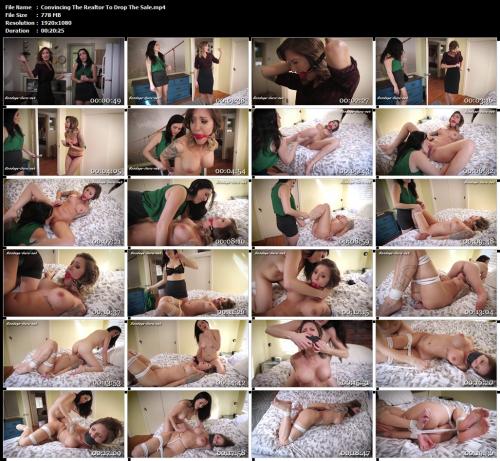