Superstars Darla Crane and Stacy Burke are reunited for this bondage-filled super fantasy by Skyryder 23. As the story opens, we learn that some time ago Danger Gal (Darla Crane) had vanquished her arch-enemy Gadgette (Stacy Burke) and the villainous vixen had been sentenced to a long stay in prison. This led to a precipitous drop in the crime rate, and Danger-Gal hung up her super-suit and returned to her career as a lawyer. But mind-numbing boredom makes the gorgeous crimebuster long for the glory days, and Darla arranges for Gadgette to be paroled so she can have more thrilling adventures. The blonde supervillainess returns to her old hideout, and is surprised when she’s confronted by her nemesis Danger Gal! The redheaded champion of justice is looking over Gadgette’s diabolical devices when she accidentally activates a wand that paralyzes her.
Danger Gal has unexpectedly fallen into Gadgette’s clutches and when we next see her she’s been securely bound to a chair — and the helpless super-lady has a powerful vibrator startegically roped between her thighs. The wicked blonde takes advantage of Danger Gal’s helpless position to ballgag the busty super-lady, expose her enormous breasts and then to unmask her! Gadgette gloats and explains that it’s no ordinary vibrator that Danger Gal has pressed up against her most intimate area. She tells the captive redhead that it will absorb her powers, and the more pleasure she feels, the more it will drain her powers until they’re gone forever! Gadgette switches on the diabolical device and Danger Gal summons all her inner strength to hold out against the irresistible one-note song of the vibrator. But despite her resolve, the defeated do-gooder must ultimately surrender to the power of the vibrator with a shuddering orgasm! Danger Gal’s downfall is complete — but what does Gadgette have planned for her next?
Now the blonde vixen takes full advantage of her unexpected victory to publicly humiliate the defeated crimebuster. Gadgette begins her special broadcast by unveiling the vanquished redhead to the world, ballgagged and bound to a post. Gadgette then declares that now Danger Gal is her prisoner, no one will be able to stop her! The cruel supervillainess then mercilessly taunts the powerless do-gooder, toying with her helpless hostage and exposing Danger Gal’s super-sized breasts. Gadgette tells the bound and gagged beauty that since the former super-lady kept her locked up in jail for so long, now it’s only fair that she keep the busty redhead imprisoned for a while. Danger Gal struggles against the ropes and moans in desperation, but all looks hopelessly lost!
The story concludes with a flashback of several years before when Danger Gal (Darla Crane) finally captured her elusive nemesis Gadgette (Stacy Burke). The blonde vixen has been hogtied and ballgagged by the busty crimebuster, and the triumphant super-lady gives an unknowingly misinformed speech to the defeated evil mastermind about how her reign of crime has finally come to and end. The masked champion of justice tells Gadgette she must pay for her crimes, woefully innocent of what their futures hold when they cross paths again. Her mission completed, Danger Gal makes her exit and the vanquished supervillainess struggles and squirms in a desperate attempt to make a final escape before the authorities arrive to take her to prison. But despite her energetic efforts to save her own skin, the knots all hold tight and Gadgette can only despair and hope for a chance at revenge! 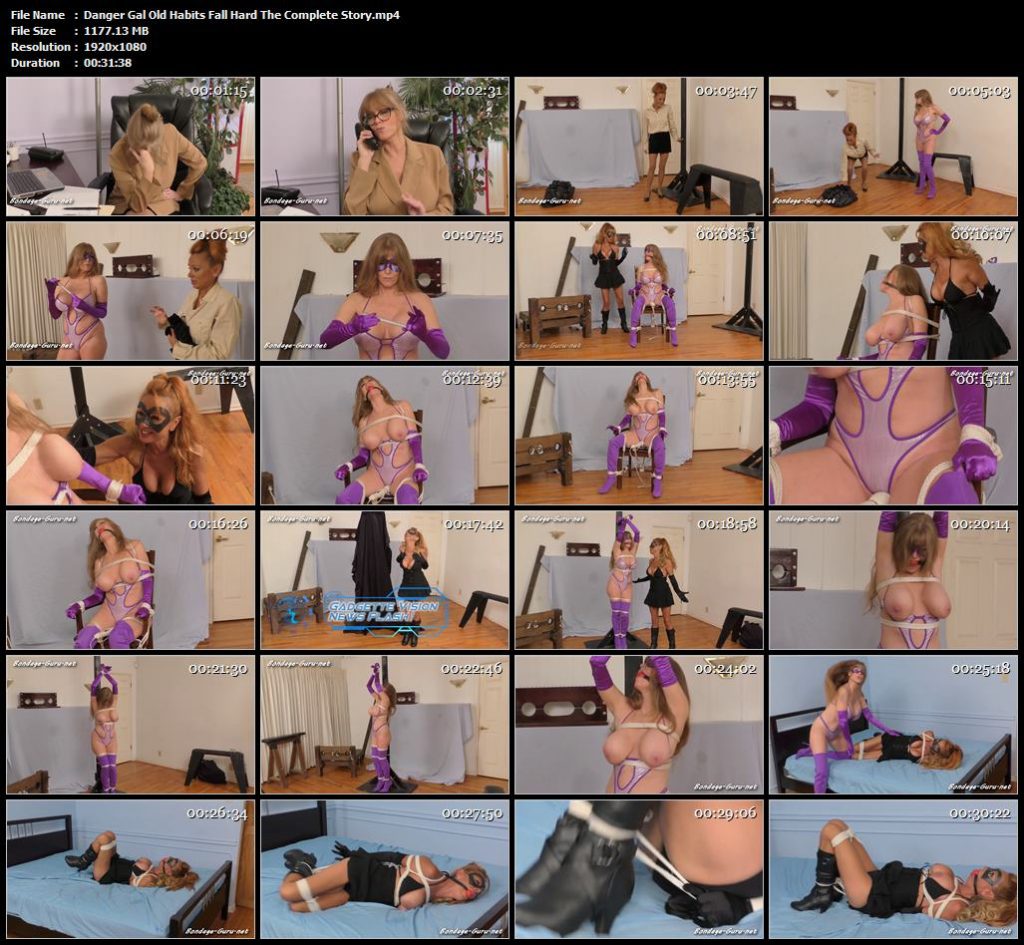