Working late tonight honey! The new boss is going to be showing me the Ropes! – Mouth Stuffed and Tied Up Girls

Crystal has come to an interview for a new job. And it turns out, she is perfect for the job. So the video begins with her calling her husband to tell him she got the job. But she tells him that she is going to be there all afternoon. As the camera zooms out, you see she is wearing a black girdle with garters holding up a pair of stockings. She is also wearing a black bra and her legs are tied with rope. Crystal finishes up her conversation with her husband by telling him that her new boss is going to be showing her the ropes. She hangs up and turns her boss, “I am ready! Tie me all up” She says as she puts her hands behind her back. A short time later, she finds herself all tied up with rope. She is very turned on and she knows she is really going to love her new job. Although she is not completely sure what the job is, if it means getting tied up everyday by this guy, she is going be working here for years. Then the good part come. “Open your mouth!” he boss says as he holds a pair of panties in front of her face. When she does, he stuffs her mouth full and then ties a rag between her teeth to make sure she stays gagged. Crystal squirms in the tight ropes as she moans through the gag. Although she knows that her husband would never approve of this, she could care less. He would never ever consider doing anything like this to her and it was something she really loved. And besides, she knew about his little girl friend he had on the side and now it was her turn to have some fun. A short time later, the real fun was about to begin when Crystal’s boss returned. First he pulled her bra down to expose her tits. they he tied a tight crotch rope between her legs. Crystal was now very excited and almost ready to lose control. She hardly noticed the video cameras recording her as she has orgasm after orgasm. 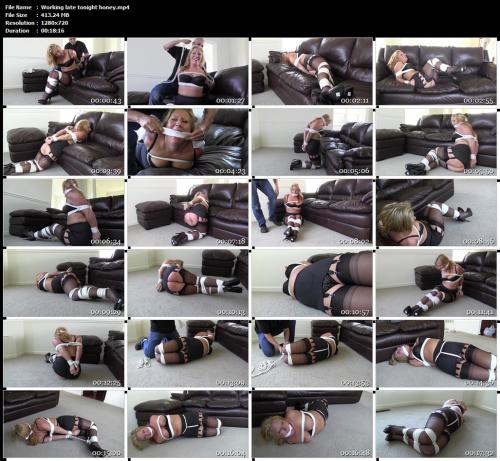 If I am not gagged, your wife is going to hear me screaming!