Chrissy is on her computer taking requests for her webcam show. The chat room suggests you do a hogtie challenge. She is surprised by the request and wonder what that could entail, but luckily she has someone helping her out today and he seems to know just what to do! He finds a roll of duct tape and being in a good mood she decides to go along with it. Next thing she knows her ankles, thighs and wrists are bound together with duct tape and he is adding more tape to bind her ankles and wrists into a tight hogtie!

As she tests her bonds she realizes that she can’t possibly escape and that she made a huge mistake. She asks to be let out but the person helping her disagrees and tells her to keep trying! He starts looking at the chat on the computer and notices that the viewers are requesting that she also be gagged with the duct tape! Chrissy verbally resists with a feisty attitude and anger but she still ends up gagged with a cloth and duct tape! She struggles and keeps angrily demanding to be let out as the person helping her gropes her and squeezes her boobs, making her even angrier by the minute! She warns him that he won’t get away with this!

After watching Chrissy furiously struggle for a minute he finally takes off her duct tape gag and she immediately starts to voice her displeasure. Looks like she will have to remain gagged! This time he cleave gags her tightly as she really starts fuming over the situation. He decides it would be cool to show her to the rest of their roommates and her eyes go wide in panic as she realizes there is nothing she can do to stop him! He cuts the hogtie off and throws her over his shoulder, giving her viewers one last look at Chrissy’s angry gagged face before carrying her out of the room! 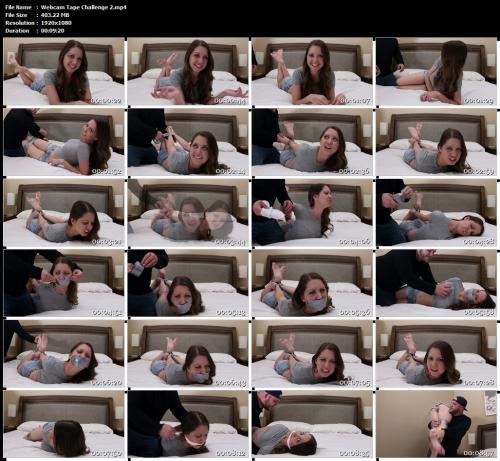