A man has grabbed Adara and takes her to his place. After he throws her down on a couch, Adara realizes that she needs to do something desperate to get him to let her go. So she makes him a deal, “I’ll let you fuck me if you promise to let me go!” She tells him. He takes her up on this deal and soon she has her panties down and him between her legs. But when they are finished, he doesn’t untie her and Adara starts to protest. As he ties her up, he tells her that he will let her go. But before that he is going to have his way with her at least one more time. And, to make sure she stays put, he ties her very tight with rope. He also makes sure she stays quiet by stuffing and tying a gag in her mouth. Finally to make sure Adara is completely helpless, the man hogties her and ties a crotch rope between her legs. he tells her it is to keep her warmed up for things to come. As she struggles bound and gagged on the floor with her tits out, Adara cannot help but feel the effect of the rope tied tight up her pussy. “Maybe things aren’t so bad. When I met him at the bar, I was hoping something fun would come out of it!” she thought to her self. 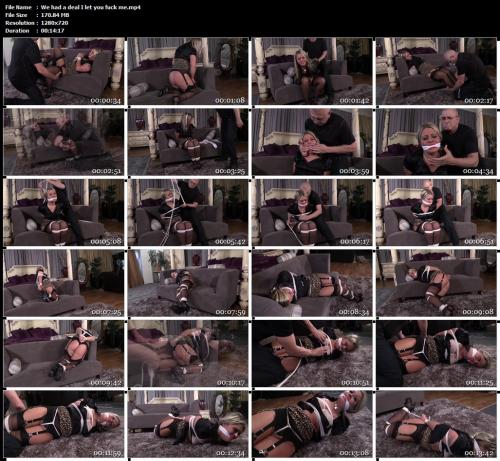 Make me your helpless bound and gagged fuck toy! – Girl Next Door Bondage

Roommates tied up and gagged – Bondage: JJ Plush, Born to be Bound