Super sexy eighteen year old model Ariana has just started university, and to have a little bit of spare cash for her shopping she has taken up a door knocking survey job part-time. Now unfortunately for her the pay is rubbish, but the clip starts with her knocking on a door in the suburbs of an older man who invites her in and professes to be a film maker. Curious as to what it is that he does exactly he admits he makes bondage videos, and realizing how hot she is asks if she would be interested in making a lot more money than her meager hourly wage. Ariana’s eyes light up with interest as the man goes to grab his ropes.

The first scene has our sexy co-ed in tight coarse hemp rope, her arms behind her back, upper body utterly immobilized and legs bound both above the below the knees as well as her ankle, because despite one of her feet being in a cast she is an absolute firecracker full of energy. The man comes on screen and packs her mouth with a large red military bandana before sealing it completely shut with red industrial grade duct tape, tearing off piece after piece until she is absolutely muffled.

Ariana puts up one hell of a bitching gagtalking fight to try and escape her bondage, calling out, or at least trying to call out that she is tied up and gagged and needs help, but the sounds travel barely more than a few feet as she kicks and squirms on the producer’s couch. She wriggles so much that her crutches clatter to the floor and it takes an immense amount of strain for the ropes and knots to even move a few inches. But being the fighter that she is, she eventually is rewarded by being able to move on to round 2.

In the next tie, her top has come off, and she is wearing no bra, allowing her beautiful creamy white perky tits to show, which both have seriously sexy nipple piercings. The curly haired lass eagerly takes her next gag, a large blue hanky with a seriously sticky red sports tape bandage wrapped around her head several times. Her ropes are even tighter than before, her elbows almost fully together, and a semi balltie connected her upper body to her thoroughly roped up legs. She wiggles, moans, grunts and gagtalks like her life depends on it but this time does not get loose at all.

In scene 3 the producer decides to break out his more specialist leather arm binder, with Ariana having her arms crushed by the fetish device and laced up painfully tightly like an old-age corset. Luckily for her the bondage loving film maker has more clean handkerchiefs on hand, with another blue rage filling up her cheeks and sealed in place with an almost entire roll of coban sportswrap/vetwrap. She has energy for days and squeals and screams into her gag, but the thick wad down her throat makes it hard to get any audible sounds out. The fight continues for several minutes in desperation until we are finally ready for her final bondage.

In the final scene of bondage torment for Ariana she is taken into a dingy garage, and strung up to the garage door rafters in a stiletto tie, struggling to balance on effectively one leg given one of her feet is in a cast. It is revealed that it has effectively all been a trick! As the ‘film maker’ announces she will be left bound and gagged for a couple of hours, before stuffing her mouth one final time and wrapping medical wrap around her head several times to keep her quiet. Being a good guy of course he leaves her with a painfully tight knotted crotchrope between the pussy, allowing her to get off while he is out of the house if she so chooses as we all know she is actually loving the helplessness. Ariana puts up one hell of a final fight, wriggling and trying to pull/knaw on her ropes and spit out her vial gag, for the chance to escape. It should all be so easy with this being a townhouse and the neighbors only a few feet away, but the ropes hold firm and the choking gag keeps her silent… 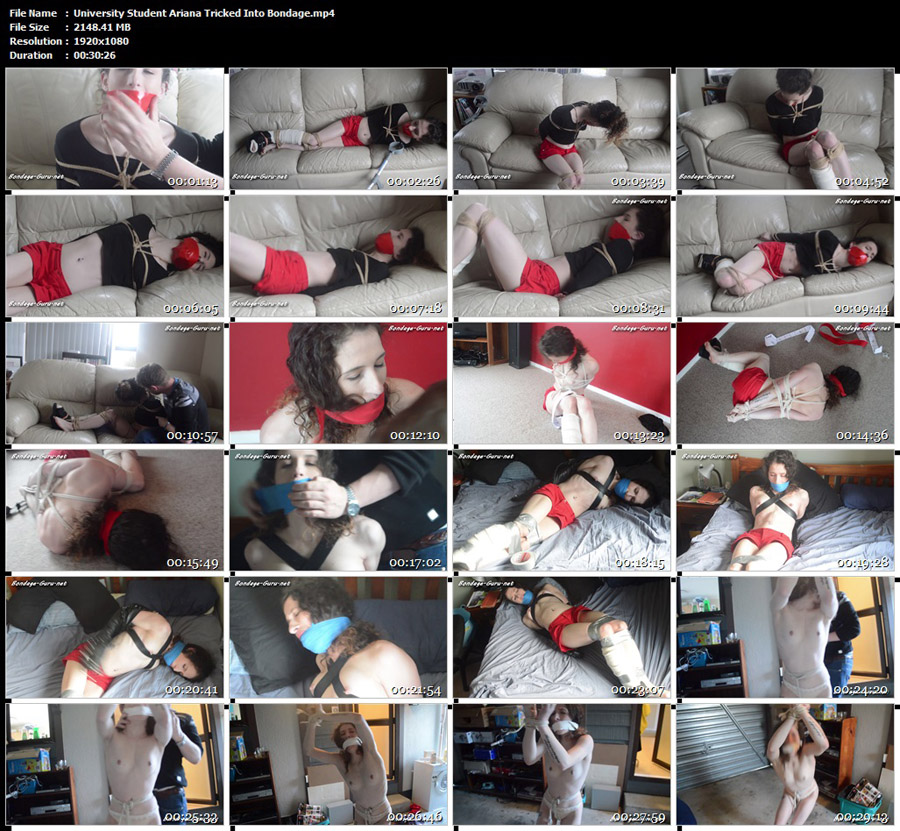 Lolly – Big titted stripper hogtied in her socks and ballgagged

Cinched and Secured – Judas – You’re Not My Boyfriend!!

Girl Next Door Bondage – I’ll call you back when I get this gag out of my mouth! HD

The Foot of the Bed – Restricted Senses – Mina