Dixie and Casey are bank tellers who’ve been taken by a bank robber. He’s forcing the tied and gagged women into his hideout and has them sit on the couch. He apologizes for taking them but he had to take them as bargaining chips in case the police close in on him. He knows the girls must be thirsty and offers them water if they’ll cooperate. Both girls nod their heads yes so he unties Dixie’s hands and tells her that she can take off her gag and untie Casey. He brings them some water and they thank him trying to be nice to him so maybe they’ll gain his trust. He informs them though, that he’s going to have to tie them up and again and get them out of the way upstairs…just in case. They plead with him and promise they will behave. He doesn’t trust them so he tells them he’d like to see them in their lingerie too. So he forces them to strip down to their lingerie. He then throws them bandanas and tells them to stuff their mouths with them. He then tosses each girl more cloth and tells them to tie in each other’s stuffing. The girls aren’t happy about gagging each other. Finally he ties each of their wrists behind their backs and marches them off.

The robber is finishing tying the women and pushes them onto the bed. He leaves them there to struggle while he goes downstairs to be on the look-out for the police. Dixie and Casey struggle and turn their backs to each other trying to untie each other’s wrists but they can’t loosen the knots. They rub their faces together trying to loosen the gags, but that doesn’t work either. Then they both see the phone on the nightstand and Casey frantically but carefully tries to reach the phone with her feet. She manages to kick the phone off the receiver and carefully maneuvers her feet so she can dial 9-1-1 but it’s tough. She manages to dial a couple of numbers, but on the verge of completing the 9-1-1, the robber comes back. He takes the phone away but compliments her on her effort. He decides the women are making too much noise and adds over-the-mouth gags with bandanas on both women. He’s then reminded that he needs to call his boss so he picks up the phone. The women are able to listen to his call and quickly realize that their lives are in jeopardy. They plead with their eyes and through their gags as to not hurt them once he gets off the phone. The robber says he’s sorry but the boss says that before he leaves he has to get rid of all the evidence, including the girls. Nate pulls out a bomb from the nightstand and says he’s going to set it for 30 minutes. To make sure the girls have no chance of escaping, he puts them both in hogties. He assures them that everything will be fine and they won’t even know what’ll him ’em and leaves.

The girls struggle hard but can’t loosen their ropes or gags and are pretty much resigned to their fate. Just then man comes into the room. It’s the police to save the day! The cop disarms the bomb and then un gags Casey and Dixie. He informs them they caught the bank robber and the girls thank the policeman for saving their lives.
*This was a custom video 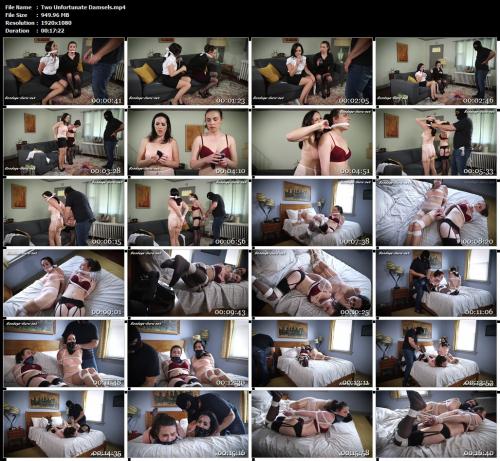