Scene opens on Tony, dressed in his normal outfit (jeans, tee-shirt, sneakers) tied loosely and badly to a chair. His hands are tied loosely behind his back and his legs to the chair legs. The scene starts with him asking her how she found him and what she wants from him. Alba is dressed in a dominatrix style. She’s wearing high heeled boots. Alba responds to his question by hitting him. She tells him to shut up and that she will ask the questions. Alba removes her boots and socks and tells Tony, “I know you have been grabbing women and doing your weird foot fetish bondage stuff to them. Well, enjoy this gag because you won’t be doing any of that stuff ever again.” She stuffs one of her socks in his mouth and wraps around tape his head. She then says, “that should keep you quiet while I get the bedroom ready for your interrogation”. The camera follows her as she leaves Tony and walks into the bedroom. There’s ropes, tape, handcuffs, a ballgag on top of the bed. Alba takes out her phone and dials. She says on the phone, “Hi. Everything is going smoothly. He’s bound & gagged in the other room. I’ll start the interrogation momentarily and once I get the info on Rachel’s whereabouts, I’ll relay immediately. I want at least a few hours to make this pervert suffer for what he did to those women so please don’t come to dispose of Tony till tomorrow morning”. She then says yes, and responds, “you can wire me my portion of the reward from Rachel’s family tonight once you receive it. Ok I gotta go because I need to go check on Tony. I’m not some bondage freak with tying ropes like this guy so I gotta make sure he hasn’t escaped.” She puts the phone down on the table next to the bed. Just after she puts it down, Tony comes up behind her and throws her on the bed. They struggle, but Tony manages to pin her arms behind her and get the ballgag into her mouth. He pushes her facedown on the bed and grabs some of the rope from on top of the bed. Now Alba is naked tied up on the bed. She’s still gagged with the same ballgag as when the previous scene ended. Alba is tied with her wrists tied together behind her back, a shoulder, chest rope harness, her legs tied above the knees around the thighs, and then below the knees, her ankles and big toes tied together. She struggles furiously at top the bed for about a minute before she spots the cellphone on the bedside table. She reaches with her toes and dials some numbers. She then tries to shout through her gag into the phone for help. The first time didn’t work, so she tries dialing and shouting again. She then decides to try to hop out of the bedroom. She makes it to the door, when Tony returns. He picks her up and carries her out of the bedroom. He brings her back to the living room where he ties a crotchrope on her and then hogties her on either the couch or the floor. She struggles furiously a couple of minutes and then she urgently tries talking through her ballgag to get Tony’s attention. He asks her if she has something to say, and she nods. He removes her gag. She says that the family of Rachel, Tony’s previous bondage victim, have offered a fortune for Rachel’s return. Alba offers him half the money if she’s untied and informed on Rachel’s location. Tony negotiates with her until she offers him all the money plus also will let him worship her feet once she’s untied. Tony says he needs to think about it and stuffs one of Alba’s socks from the first scene (that she used to gag Tony earlier) into Alba’s mouth. He secures it in her mouth with a clear tape cleave gag like the one used for Rachel. Tony says he has a better deal and begins worshipping Alba’s feet, sucking on her toes, and occasionally tickling her soles. Tony then take a break from this after 1-2 minutes, and grabs his phone and says, “Hi Greco. Are you starting to get bored with Rachel? I’ve got a strong, feisty new girl. Here, you can talk to her!” He puts the phone next to Alba’s mouth. While she talks into the phone, she asks for help and to be untied. Tony spanks her ass and tells her that’s not what Greco wants to hear. Tony makes Alba tell Greco over the phone that she likes being tied up and having her toes sucked. Tony then grabs the phone and tells Greco that they’ll be talking more soon to arrange the swap. Tony tells Alba that he’ll take from Rachel’s family once she is traded for Alba. He says this is a better deal since he doesn’t trust Alba since she was planning to him and then make him disappear just minutes ago. He briefly worships her feet once more and then ties rope around the soles of her feet. He then says he’s going to go pull his truck to transport her…(ENGLISH DIALOGUES, BONDAGE, ROPE BONDAGE, NAKED BONDAGE, FOOT FETISH, FOOT WORSHIP, BALLGAGGED, BAREFOOT, STRUGGLING, GAG TALKING, TOE TIED, BOOBS EXPOSED, HOGTIED, SPANKING, TAPE GAGGED, STUFFED MOUTH, NUDE BONDAGE, ROLE PLAY, DID, GAGGED GIRL, HD VIDEO) *Sequel of “Rachel’s stooge” (Part 1-2) 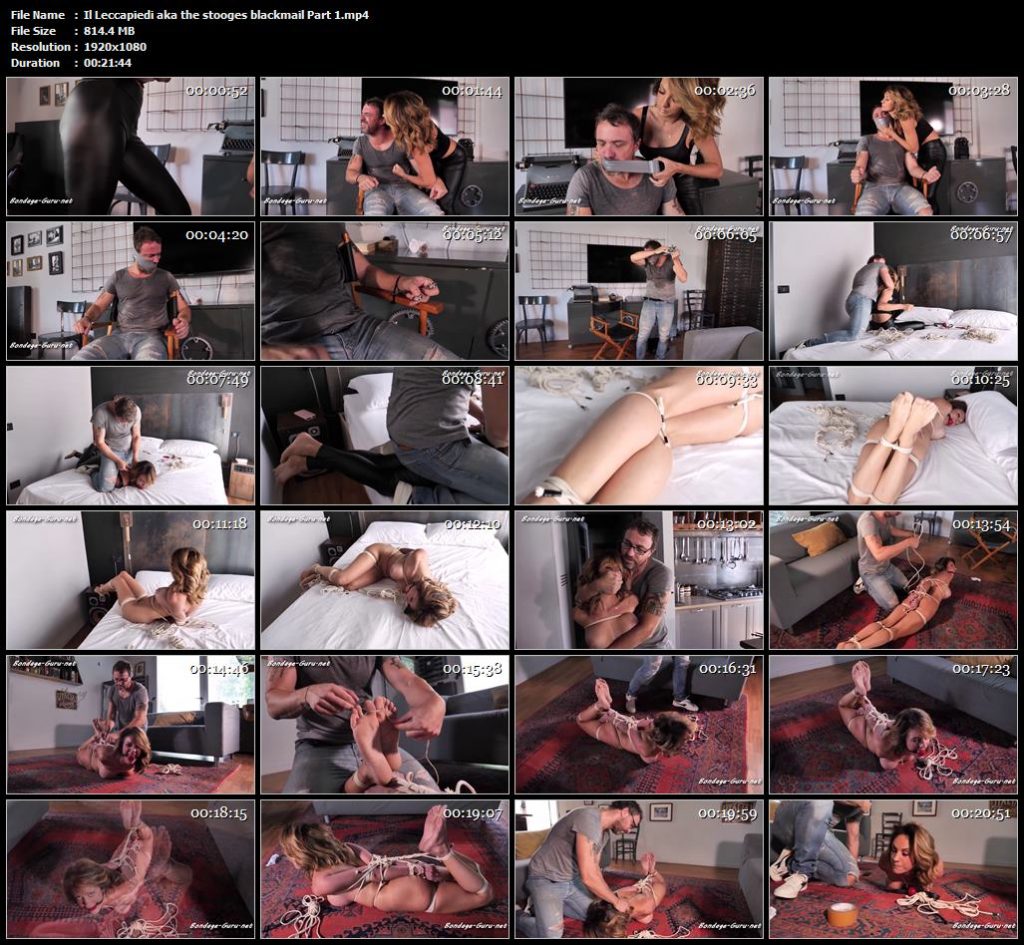