Chrissy Marie didn’t learn her lesson after what happened last time. She stopped wearing her ‘slave’ collar around school but she is still just as much of a teacher’s pet and was caught snitching on the school bully yet again! The school had decided to give him one last chance after she got him expelled last time, but this time he will never be allowed back at school again! Since he won’t be able to see Chrissy at school anymore, he decides he is just going to have to take her home with him! He tied up her wrists and knee socked feet and gagged her with a special harness ball gag he got just for this occasion, and has even more special things prepared for her back at his place!

The scene starts as Chrissy stands bound and gagged in the corner, still in her schoolgirl uniform complete with her neatly buttoned satin blouse and shiny red tie. She is struggling against her bonds, wondering what he is planning to do to her this time. He soon returns and leads her to the center of the room by her neck tie and begins to remove it as she mmppphhhss in protest. He shows her a brand new collar he got for her, it’s a lot better than the one she had been wearing around school because she thought it was cool! Now she will be forced to wear this one, officially making her his slave for the foreseeable future, and she can’t say a damn thing about it with that ball harnessed tightly into her mouth!

He proceeds to bind her elbows together with her red neck tie it as she squirms and squeals in pain. She is not cooperating and struggling too much as he gropes her tits over her silky blouse, so he gets an idea that will keep her put and teach her a nice hard lesson about being a snitch! He grabs some more rope and hogties her feet to her head harness, binding her into a completely inescapable position and effectively immobilizing her! She begs him frantically to release her from the excruciating hogtie but he shows no mercy! Instead he just leaves her there stuck in her bound and gagged predicament until he is sure she has learned her place! Chrissy knows escape is impossible as she struggles and mmmpppphsss helplessly, desperate for just an ounce of relief from her elbow bound hogtied torture! 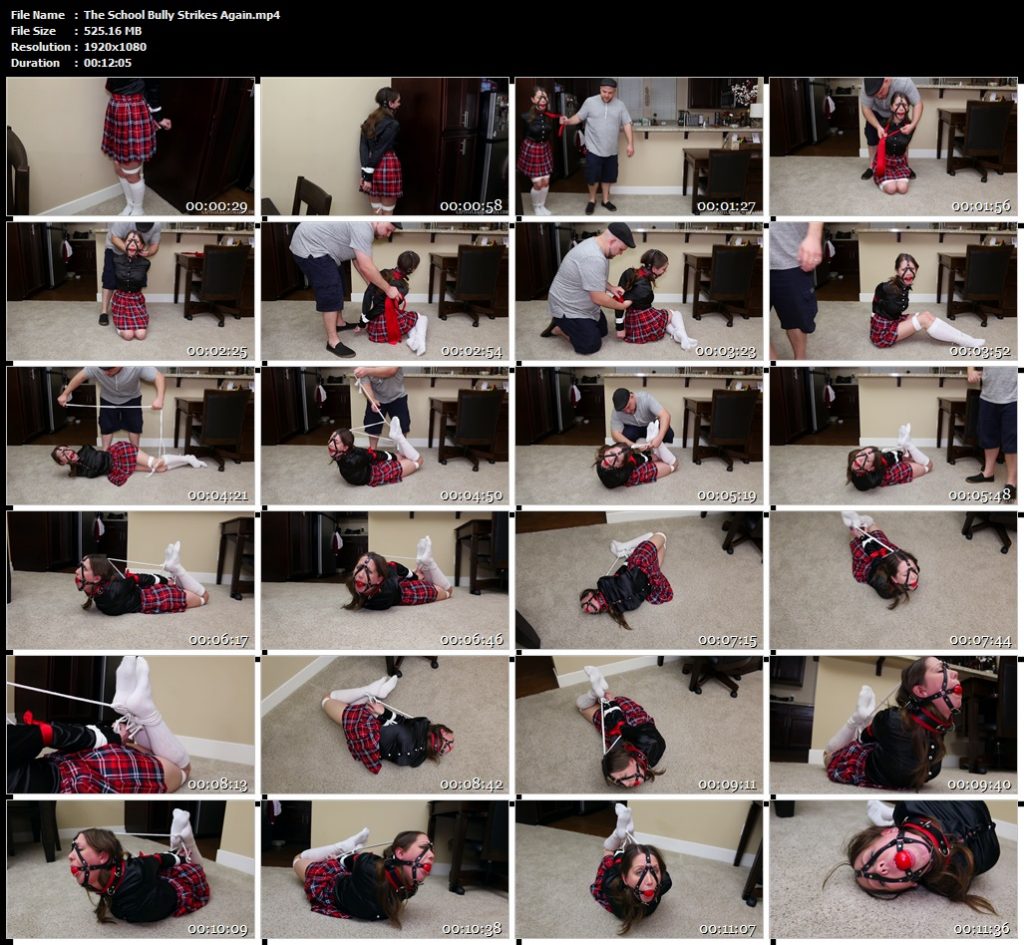