Chrissy has an electrician over that has just completed work on her electrical panel box. However the electrician has other hobbies that Chrissy is unaware of. The electrician follows her to the bedroom where the video cuts off and moves to the next scene where we see Chrissy is completely nude and has already been tied up in a very vulnerable position. The electrician overpowered her and tied her in a chair in the basement with her legs spread and suspended with rope. Her hand are bound behind her back and her chest harness secures her to the chair. Chrissy is begging and pleading to be untied so the electrician stuffs her mouth and wraps duct tape around her mouth and head sealing her lips. To add to the gags effectiveness he uses a few strips under her jaw then wraps the tape around twice more. Next he grabs some twine and ties it to her chest harness. He uses the first rope and binds her left breast nice and tight. Then he grabs the other rope and binds her right breast. Upon completing the breast bondage he grabs the vibrating egg he found and inserts it into her pussy securing it inside with a crotch rope. Next the Hitachi is places it directly on her clit and taped to her thigh to keep it in place. He switches the toys on high then Chrissy is left to helplessly orgasm. Towards the end the electrician comes back and says his goodbye with the goods he has stolen. Chrissy screams through her gag to be let go but the electrician leaves her to struggle hopelessly in peril. 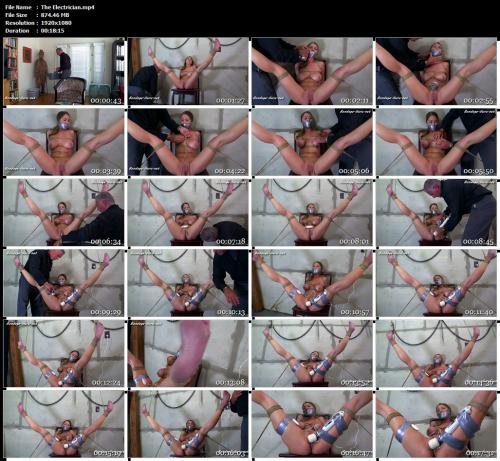