Chrissy is a call girl who thinks she is showing up to meet a client but when she arrives she is unpleasantly surprised to learn it was a set up. A female cop emerges from the bathroom right after the guy (pov) gets Chrissy to say out loud why she’s there. The cop immediately cuffs Chrissy’s hands behind her back then tells her to stand up and starts frisking her to make sure she doesn’t have anything on her, all while Chrissy bitches are being set up. The cop handgags her then shoves a ballgag in her mouth to shut her up. Chrissy is pretty sure the gag is not standard procedure but there’s nothing she can do about it with her hands bound in handcuffs. The female cop goes to pull the car around (which wasn’t out front otherwise Chrissy would have known it was a set up!) while the guy (pov) stays to keep an eye on the frustrated Chrissy as she squirms and mmmpphs helplessly. 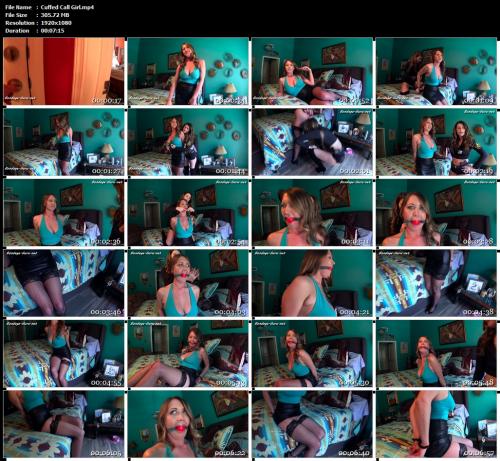 Can’t get to the phone! He has me tied up and gagged! – Constance – Girl Next Door Bondage