Chrissy just got home after working a long shift at the restaurant, ready to relax as she is about to take off her tennis shoes, when all of a sudden she is interrupted by an intruder who handgags her then bends her over the couch as he starts tying her wrists tightly with rope! Then he ties her ankles and says he has been watching her for a while and has big plans for her. Chrissy is angry but scared at the same time. He leaves for a moment and obviously Chrissy gets up and start to hop away, but the intruder catches her and throws her back on the couch. He throws a bag next to her and she asks what’s it for. He says “it’s for you” and picks her up and carries her upstairs over his shoulder!

When the camera comes back, Chrissy is laying face down on the bed, wrists still tied together and elbows now tied as well. Her ankles have been untied and the intruder starts to take each heel and bind it tight to her thigh making a frog tie. Then a larger rope is placed around both her thighs to tie her legs together. He ties her ankles last then takes off her reeboks, briefly tickling her socked feet before realizing her protesting is becoming way too loud! He gags her with the large ballgag he came prepared with. He let’s her be for a while as she struggles around on the bed, trying to free herself from the tight ropes.

After a while the intruder returns and starts to untie Chrissy. When the camera comes back her legs are still frog tied separate and tied to the foot board. Her wrists are tied together under her body and down between your legs also attached to the bed, forcing her ass to be raised up in the air. He pulls off both her socks, removes the ball gag, and tries to stuff her entire knee high sock into her mouth! Once he can’t possibly pack anymore in he wraps duct tape around her head several times holding it in place, with part of the sock sticking out since it’s so big! Before he leaves the room he pulls down her leggings exposing her sexy thong and bare ass. He bends down and gives each big toe a little suck as she squirms and mmpphhs hard through her sock gagged mouth then she is left to struggle while he prepares the final stage of his plan!

The camera fades and when it returns Chrissy is laying on the table completely nude! The intruder has plastic wrap and has cleave gagged her with it and is now mummifying her to the table! Chrissy has no idea what he is going to do to her now, the fearful panic in her eyes as she realizes she is stuck with no way out of her predicament! 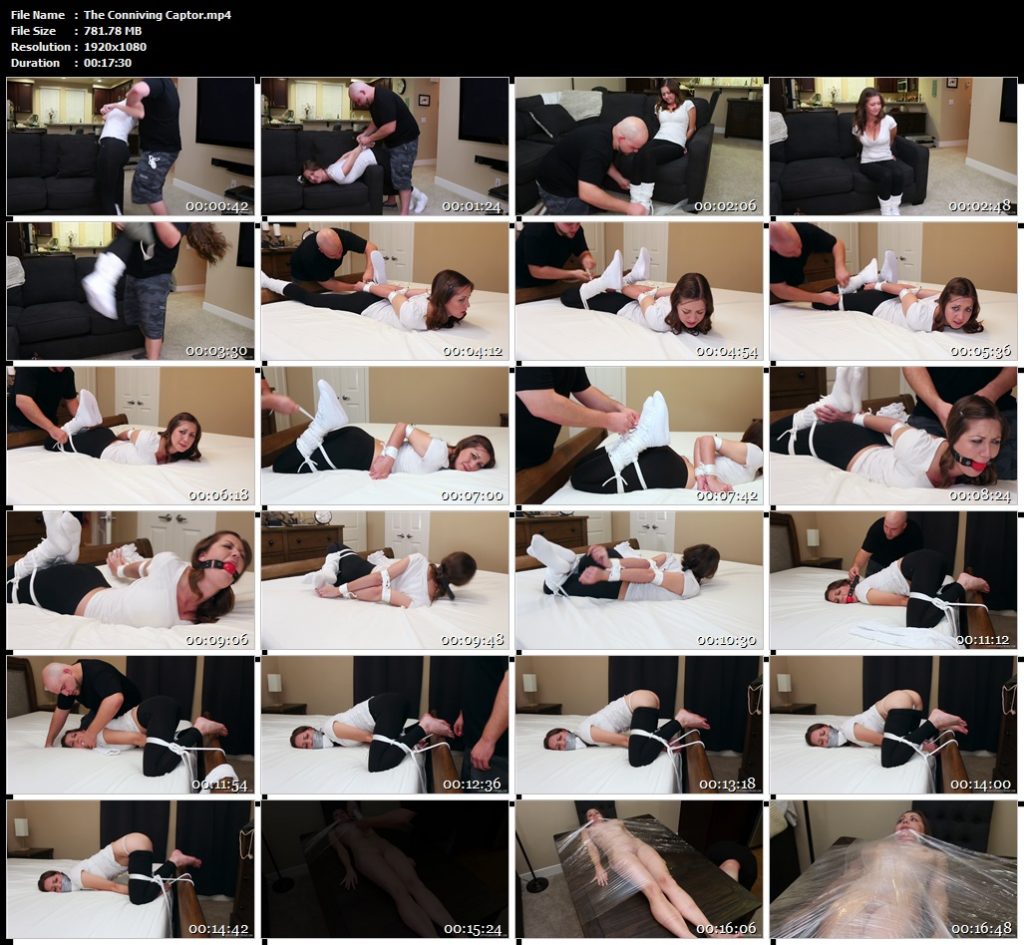