Stunning buxom exotic beauty Shay sits in a shiny dress, conveying to her bestie about her current situation: trying to stay several steps ahead of her husband, a reputed criminal mastermind (at least a competent criminal manager!). Sexy Shay is confident that she’s out of his reach, but that’s when she’s proven very wrong. In walks a masked maniac who immediately commands her attention. She goes into bargaining and pleading mode, attempting to stay the hand of this enforcer sent by her hubby. Unfortunately, her entreaties fall upon deaf ears as she gets grabbed. Handgagged into silence, her arms are pinned behind her back as he huge boobs are lustfully groped. Then she is ‘smothered’ into ‘submission as the masked menace clearly plans to reunite husband and wife! When she’s feeling more alert, she continues to discuss her freedom while the concealed goon binds her hand and foot with rope. Finally ready to silence her, the venal villain puts a hand over her mouth again, holding her sexy lips in place as his other hands touches her ALL OVER. Once he has had some twisted fun with her, he brandishes some tape as several pieces are torn off and plastered right under her nose and eyes. She is lecherously fondled before being left to languish. The ropes hold her fast, but she moves to loosen them by straining and flexing her lithe form. While she contends with the ropes she is given a thorough examination with many lingering closeups of her best assets. After many minutes have come and gone, the masked marauder is back and justifies more lewd acts of manhandling his hot bondagette. He strips her of her dress and relentlessly touches her nude form, standing her up as he has his sick thrills. Placed on the ground, she resumes straining against her bonds and moaning into her tapegag. Now laid bare, she is even more entrancing to gaze upon and gets some lingering gazing! Eventually, the hired henchman comes back to put her in a hogtie so she won’t have a chance to get away. He again feels her up, rubbing her in the right (or wrong) places! When he thinks it’s time, he bids her farewell since her spiteful spouse will be along shortly. Looks like she’s going back to the husband who might like her in bondage since she looks so ravishingly sexy! 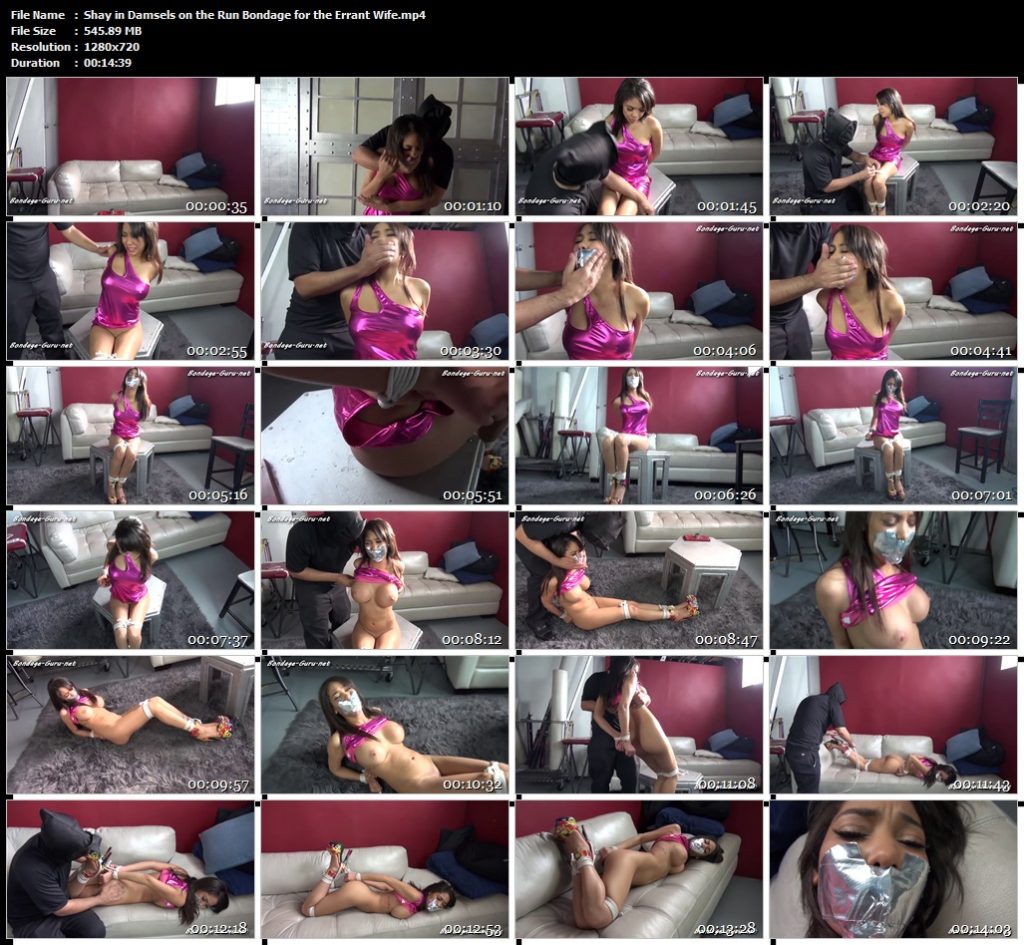