Ultra naturally super busty Mai is the latest incarnation of Cara Loft, Crypt Seeker, and she’s on the hunt for another coveted prize from antiquity, the Gilded Bastet Idol. She finds herself near an abandoned mine in the Egyptian desert where inexplicably trees grow despite the lack of any visible water source! The clues she’s followed indicate the idol was lost in the vicinity so she looks around (luckily her outfit keeps her cool given how little it covers!). She comes up a particular tree mentioned in a relevant Demotic Egyptian text and so she looks about. Reaching out her hand the idol seems to magically appear as if it were somehow camouflaged from sight until someone reached out to take it! Thinking her quest is over, she is surprised by an armed goon who accosts her, demanding that she turn over the prized antique. Left with no alternative she hands it over, but warns the villain, who we learn appropriately refers to himself as the Scavenger, that she won’t let him get away with this affront! Not long thereafter, she is tied to a pillar in a rather appealing position. The villain reaches out and handgags her when she talks back a bit too much for his liking. Her huge breasts are squeezed and then he runs his hands all along her sexy body. Then it’s time to gag her as she is very tightly wraparound tapegagged. More fondling and then she’s left to struggle as he goes off to make some evil arrangements. The valiant adventurer strains hard against the ropes and can feel the harsh pillar brush against her from behind. Her energy doesn’t abate though and she continues to try to loosen the ropes as she is watched from every sexy angle along with lots of lingering closeups of her considerable assets. The Scavenger returns before she can free herself and has brought a black box that doesn’t bode well for our superheroine. He turns on the timer and places it next to her as she continues to try to resist him. He keeps groping her and pulls her top down, which really humiliates and infuriates her, as he feels her up to his twisted heart’s content. When he thinks he’s spent enough time with her, he departs with the prized statuette. She resumes her struggle, really trying hard to loosen the knots as she is examined in more thorough personal space invading fashion. Eventually though, she somehow manages to free a hand just as the countdown sounds a rather ominous tone! Looks like we’ll have to wait and see if our heroine escapes and gets revenge! 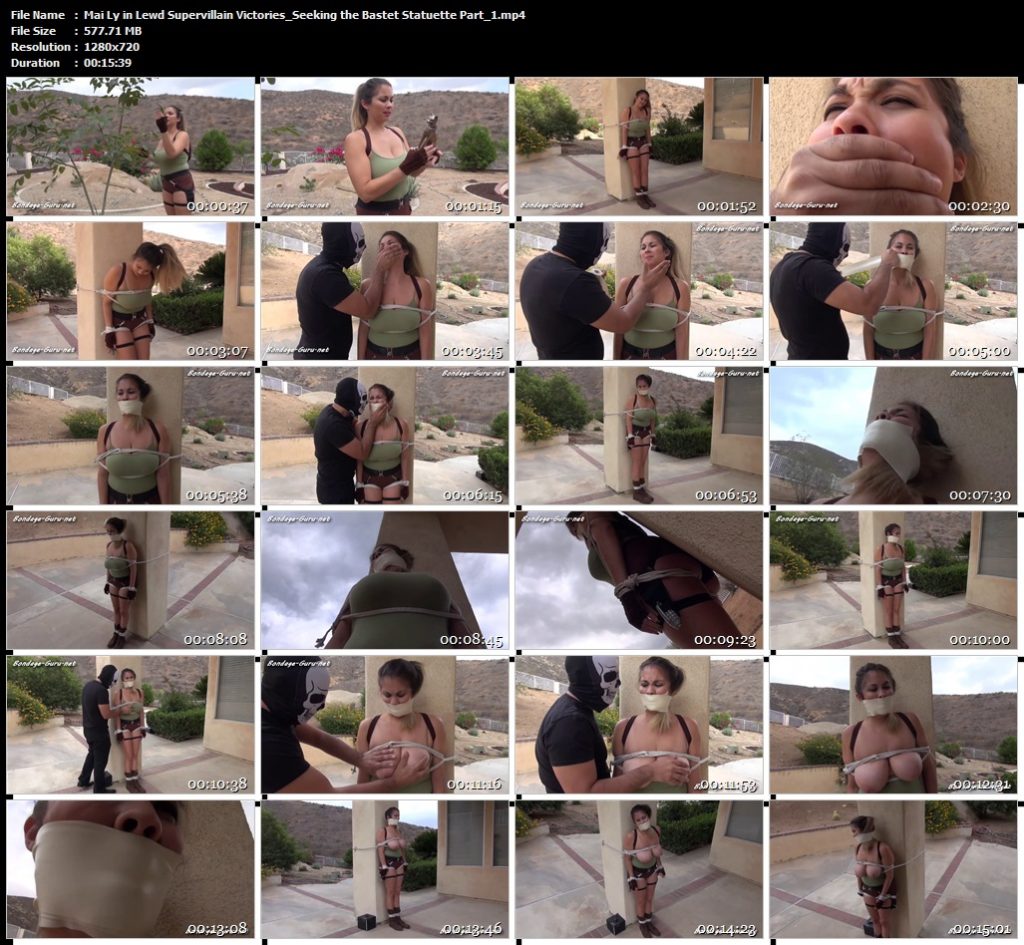 ASIANA STARR BONDAGE – Mizuna Kitten is Back From Hiatus Part 2