Since finding bondage books and rope in her mother and step father’s bedroom, Gia has decided she likes the idea of being tied up. So today believing no one would be home, she has dressed herself up in some of her mother’s sexy clothing, borrowed some rope and started to tie herself up. But just as she has her knees tied, she hears someone come in. Quickly, she hides the rope and covers her bound knees. Her step father walks in and asks what she is doing in her mother’s dress. The dress Gia is wearing is very tight and anything under it is noticeable. So her step father notices the rope around her knees. Very embarrassed, Gia tells him that she is into bondage and begs him not to say anything to her mother. The man looks over his step daughter in her mother’s dress and realizes that Gia looks very sexy in it. Although he has always he has known it would be wrong, the man has had thoughts of tying his step daughter up in the past. After all, the rope and books she found, belong to him. But then Gia seems very interested in being tied up by her step father. So the two both agree to keep it secret and Gia lets him tie her up. Soon Gia finds herself very turned on as the man ties her nice and tight. Now Gia wants more that just being left to struggle bound and gagged. So just before he gags her, Gia tells him that he can do whatever he wants to her and again reminds him that Mom will never find out. The man gives this some serious thought and even pulls her big tits out of her bra. But his better judgement gets the best of him and getting hogtied with a tight crotch rope is going to have to satisfy Gia. 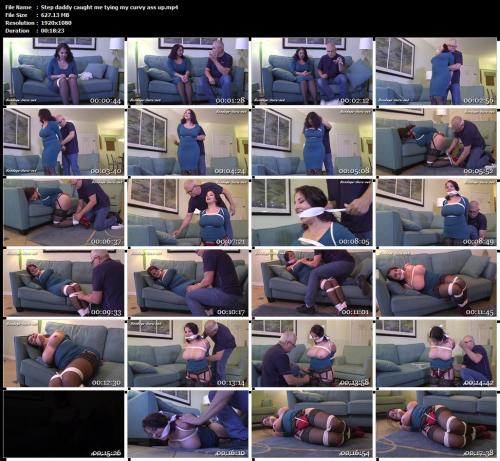