After catching investigative news reporter Nyxon snooping around, the man decided that she had seen too much and could not let her leave. So, he took her down into a basement room and started to tie her up with rope. Nyxon tried to resist, but the man was too strong for her and soon had her trussed up tight. She then warned him that her co-workers would soon come looking for her. But the man just ignored her and told her that no one would even know she was down here. He insured this by stuffing her mouth and a sock and then wrapping tape around her face and between her teeth to gag her. Then after leaving to struggle bound and gagged for a while, the man returned. He UN-buttoned and pulled her skirt off so she was now just wearing her pantygirdle with garters that held up her stockings. Then after opening her blouse and pulling her bra down, the man crotch roped and hogtied the news reporter. Now very helpless, Nyxon knew she was going to be tied up down here for a long time with her big tits exposed. But her biggest worry was, trying to figure out what the man was planning to do with her. 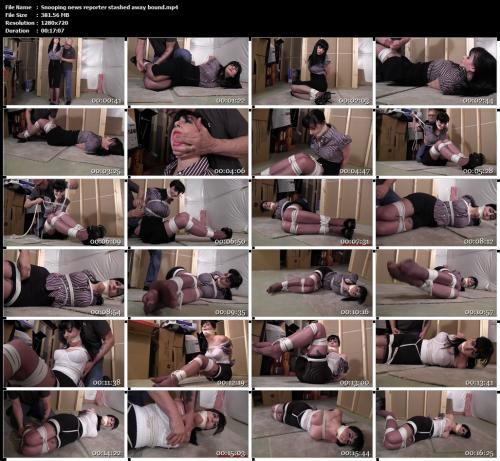