Chrissy is a schoolgirl detective who is investigating a house when she gets caught! Her captor knows that she was on to him and sneaks behind her and handgags her to silence her attempts to scream as he drags the struggling detective into the next room! There she gets secured to a chair with her wrists tied together with rope behind it and her ankles and legs also tightly bound with rope! Her mouth is stuffed and tapegagged and her captor leaves her alone, telling her to be good and not try anything while he is away, but of course Chrissy doesn’t obey! The young detective struggles tirelessly to escape from the tight ropes until she finally manages to get loose. She knows she should get out of there as soon as possible, but she doesn’t want all of this to be a big waste of time! She takes her time searching for the evidence on a computer instead of leaving. With her back turned the masked man returns and is shocked to see that his captive detective was able to get loose! He captures her again with a firm hand over her mouth and drags her back to the chair where now he plans to really do her in!

This time her wrists are crossed and bound with strong duct tape that he is sure is impossible for her to escape from! Her mouth is packed yet again and the duct tape is wrapped over her mouth and around her head several times making a very tight and effective gag! Her squirming body is pinned to the chair with even more tape and her tighted legs are tightly bound to top it off! Her captor tells her he at first he didn’t plan to hurt her, he just wanted to have some fun with her to teach her a lesson about snooping around, but she had to give him a hard time. Now he just plans to blow up the house.with her still in it! She tries unsuccessfully to plead with him with using her blue big eyes since she can’t manage to talk, but it’s no use! He leaves the poor chair bound detective desperately struggling and helplessly distressed! 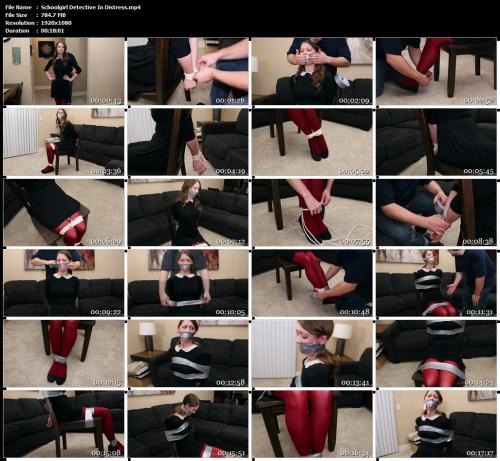