Chrissy comes to and realizes she is stuck in in what seems to be the trunk of a car! Her legs and wrists are tightly bound with duct tape and she can’t remember how she got here! This is certainly her worst nightmare, and she hopes this is just one of her stupid friends playing a prank on her! She then hears the engine go quiet, and a door open. She starts to kick and mmppphhh loudly through her tapegag, desperate for someone to help, but unfortunately for her the man who opens the trunk does not have intentions to help her! She looks up at with him with big eyes as she realizes she is in far worse of a predicament than she originally thought!

Once he gets her out of the trunk he forces her to hop over to a chair in the middle of the garage. At first she is hesitant, worried that she will fall with her legs taped together so tightly, but he threatens her into doing it anyway! She precariously hops to the chair and sits down, confused as to why there is a camcorder pointed at her, but relieved that the man is cutting her hands free from the tape. He explains to her that when he removes her gag, she has to look into the camera and tell his boss that if he ever wants to see his daughter again than he will have to pay up! Turns out, her rich CEO daddy fired him and he plans to use her as bait to make sure he gets proper severance pay! Her forces her to hold a sign as she begs her daddy to pay the ransom so that she doesn’t get hurt, crying that she is scared and worried that he is really serious! Indeed, the man intends to show just how serious he is!

With the camcorder still rolling he stuffs a large cloth into her mouth and gags her with more tape wrapped tightly around her mouth and head, telling his boss that this is just the beginning and she will get it much worse if he doesn’t pay up quickly! He then tapes up her wrists again then pulls up her tank top, groping her as she squirms and mmppphhhsss in protest! To be sure she can’t escape, he adds some extra tape around her body and secures her socked feet to the chair, leaving her helplessly tape bound and gagged while the man goes to send the video. Chrissy struggles desperately to get free from the inescapably tight tape, hoping daddy will pay the ransom and rescue her before it’s too late! After what seems like hours of struggling the man finally returns to let her know it looks like the boss is going to pay up, but unfortunately for Chrissy he will have to keep her there bound and gagged all night until he has the cold hard cash in hand! 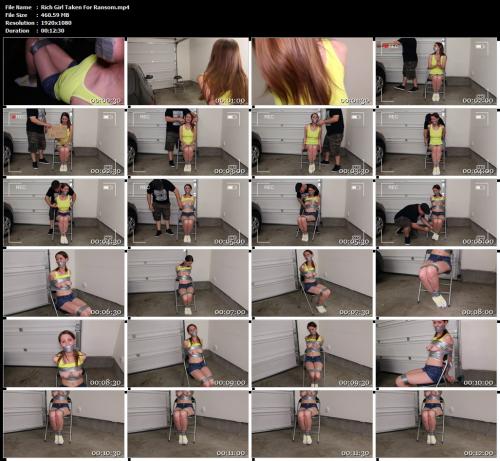