Ultra Girl continues to suffer at the hands of The Inquisitor! As part 3 begins we find that ULtra Girl has been tied standing to a chair. Her ankles tied to the chair legs, her wrists tied in a modify strapaddo to the back of the chair. The Inquisitor adds a tight crotch rope to Ultra Girls predicament and pulls it tight over the bed frame forcing Ultra Girl to stand on her tip toes to keep pressure off the crotch rope. The evil villain then begins his work on the sexy Superheroine. Her legs already strained because of the crotch rope, The Inquisitor uses a riding crop to slap and spank Ultra Girls legs. The pain from the riding crop on her strained legs forces Ultra Girl to make a choice, stay on her tip toes and endure the pain in her legs or lower her feet to the floor and make the crotch rope even tighter. It’s a sinister predeicament Inquisitor has placed Ultra Girl in. He torments her with her power belt, placing it on the crotch rope for her to see. He pulles her crotch tighter a few times, forcing her higher on her toes. He flogs Ultra Girls strained legs, sore legs making her plight much worse. Her legs quiver from the strain, again she is forced to make a decision, stay oon her toes and endure the pain in her legs or make the craotch rope tight and dig much deeper. Ultra Girl feels the wrath of The Inquisitor and suffers at his hands just as he has been doing to women all over. Eventually, The inquisitor places Ultra Girl in the floor, he torments her some more and tells her he has more business to attend to. He places her in a tight hogtie, places her power belt on the bed frame and leaves her to struggle to get her power belt and escape. Will Ultra Girl get to her power belt? can she regain her super powers and escape the peril and clutches of The Inquisitor? Get Ultra Girl part 3 today and see for yourself! 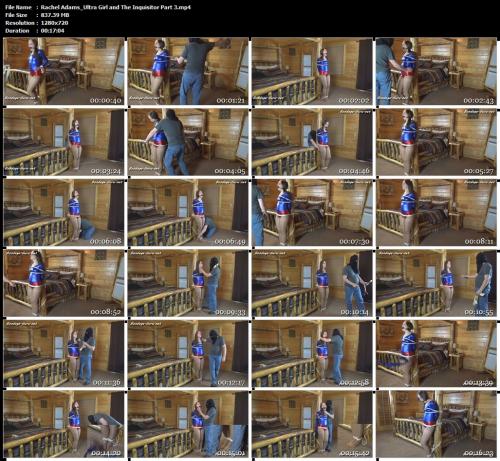 Girl Next Door Bondage – Carried away bound and gagged with a pillowcase over my head!