Ultra Girl has fallen victin to the evil villain The Inquisitor. As part 2 begins Ultra Girl is carried in to the over The Inquisitor’s shoulder. Her hands tied behind her back, ankles toed tight and a big ballgag silencing her. SHe’s placed up against the post of a bed and secured to the post with lots of rope and on screen tying. Ultra Girl is teased and toyed with, like a mouse that has no escape from the cat. The inquisitor mocks Ultra Girl with her power belt, knowing that she is completely powerless without her belt. Wanting to know where her base of operation is. The Inquisitor begins his work on the captive superheroine, slapping her thighs with a riding crop. He toys with her, alternatingly slapping her thighs with the riding crop, not enough to cause tramendous pain, but just enough to get her attention. It’s the game he plays, slowly increasing the peril and torment he subjects his prey to. He wants her to know it will get worse, but a little at a time. He eventually brings out a flogger, increasing the intensity of Ultra Girl’s torment, he flogs her thighs and her nylon clad feet. Ultra Girl remains defiant and The Inquisitor relishes the challenge that she presents to him. Add this Rachel Adams video today and enjoy all the action including awesome picture in picture footage. 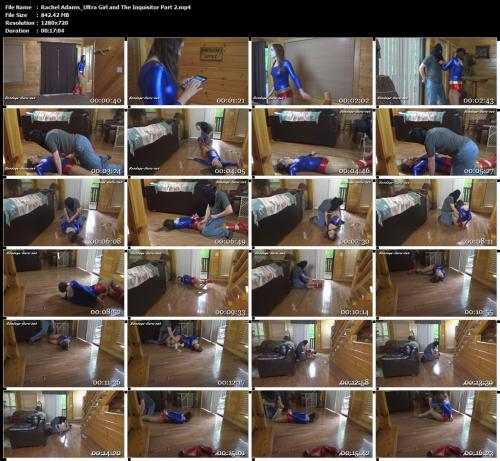 Tie up Santa Girl and do naughty things to her! – Girl Next Door Bondage – Rachel Adams

Girl Next Door Bondage – Carried away bound and gagged with a pillowcase over my head!