Supergirl and the evil villain Penny are still shackled and tied when evil villain Dolly comes to check why Penny is taking so long. She finds Penny tied and tape gagged next to Supergirl. Dolly tries to remove Penny’s gag to ask what happened when she is ambushed by super villain Mr. Trance. He puts her in a trance making it too easy to overpower her.

Mr. Trance ties Dolly’s wrists together and onto the jail cell. He stuffs her mouth with a big sock and wraps around a microfoam tape gag. When he is done he puts her out of the trance then she realizes she is helpless and powerless. Mr. Trance leaves them all helpless and Supergirl without her powers.

Who is going to save them now

The two villains Penny and Dolly try to get out of the ropes Mr. Trance has put them in. Supergirl tries to help them but she is too weak because of the kryptonite alloyed shackles. They struggle for a while and mmmphing.

Then the evil villains overthink the situation and realize Supergirl is their only way out. So they try to give the keys of the cell and her shackles to get out of this tight situation. THEY SUCCEED! Supergirl is released!

But what about these two evil villains? Supergirl leaves them right where they are! 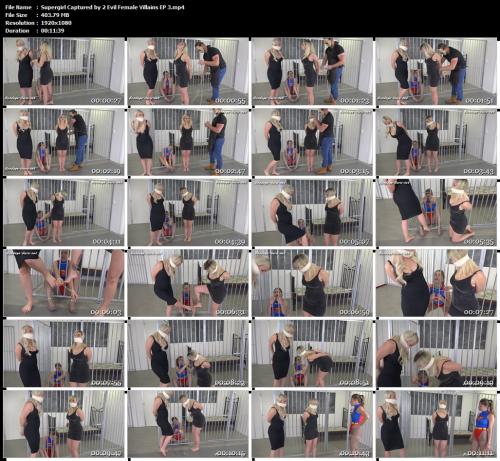