Cat burglar Nyxon has just broken into a house, and is beginning to snoop around. Suddenly, the owner of the house appears & demands to know what Nyxon is doing in his house. Nyxon stammers searching for something to say, but the man grabs her & starts wrapping duct tape around her securing her arms & her legs. He wraps her up in a fuzzy grey blanket, pushes her up against the door, & starts to tightly wrap her in duct tape. Next, he takes a blue fleece blanket, wraps it around the grey one & tightly wraps her in duct tape from her shoulders to her ankles. He then lowers her onto the floor, takes a large pair of white panties, shoves them into her mouth, and then wraps duct tape around her head. He then takes a large tube sock, ties that around her head & wraps even more duct tape over that. He then leaves her there to struggle on the floor in her very tight mummification. 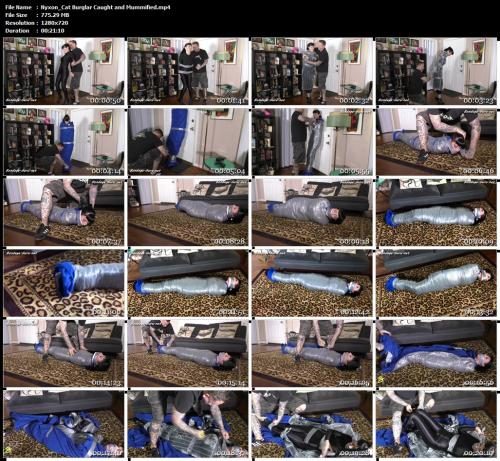