Hannah wants to resign from her job at Gagged Inc. but no one is allowed to resign. Hannah was the assistant to the boss and she didnt want to work for him any longer. The boss wants Sahrye, who works in human resources department, to tie her up and make sure she doesnt go anywhere. Sahrye decided to have her back to Hannah and talk on the phone with someone about Hannah. Sahrye thought she had good enough binds on Hannah but that wasnt the case when Hannah got free. Hannah decided to get revenge on Sahrye and tie and gag her up. Sahrye couldnt get out of Hannah’s binds. The boss walks in and isnt happy with the scene of Hannah being gone and Sahrye stripped, gagged and bound. So instead of giving Sahrye a chance to really explain, he places a gag in her mouth and a vibrator in her panties. Sahrye is forced to orgasm. Seeing how she is head of human resources and doesnt seem to care much about her title. 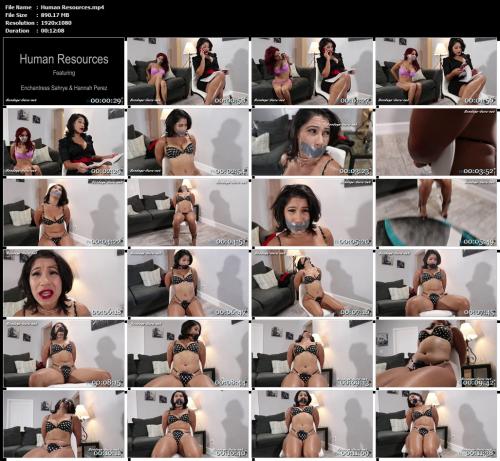 Hannah Perez On The Stool

Hannah Perez Struggles To Get To The Door